Dogs of the mountain

Everything on the mountain is their territory:

The small farm on the summit, the chickens, ducks, rabbits, goats, and cats, the donkey, the pig, the trout in the pond, the cliffs and the lake, the road, the forest of maple, oak, cedar, the pines, the mossy rocks, the squirrels, groundhogs, racoons,  porcupines, the ravens, all the creatures, and me and the red cabin.

I hear their footsteps in my sleep when they walk across my verandah. They leave bones on the land. How will I ever leave them?

The ridgeback mix, was the first one to greet me. He came out of the darkness, silent and calm,  peed on my car, and claimed me. He lay down on the driveway at my feet, lithe and elegant as a cat.  I called him, ‘Lion Dog’. Our bond was there from the beginning.

The boxer, was a rescue, and still a pup when I came three years ago. He was a whirlwind, crashing into me, leaping up like a rabbit. He annoyed me. I thought: who could love a face like that? He wormed his way into my cabin, stole my cheese from the counter when I wasn’t looking. Once he ate a whole apple pie. I found the empty shell on the floor, while he.lay curled up in front of the fire, as if he’d been there all along, head resting on his paws, one eyebrow raised, little stump tail slowly wagging. Now he knows. No more stealing. Now he is the closest to me of all the dogs.

A black lab mix is the old alpha. She was suspicious. She kept her distance, standing on the hill, barking down at me. Her bark had an irritating wail to it. I was fixed in her mind as a break in the continuity, a strange colour and smell that never seemed to blend in.  I don’t remember how or when it changed, how she suddenly came running to greet me, in her funny short-legged hobble, four white feet stepping to a dance, head down, body wagging side to side. I find her sometimes lying on my porch, in her strategic spot, surveilling the driveway and the road coming up from below. She grew up in the cabin before I came. She seems to remember a certain feeling about my place, as if her puppyhood and my presence here are twined.

I hear them calling from the mountain when I walk home from work through the dark valley.  I know their voices: the lonely plaintive cries of the old lab, the deep gruff bark of Lion Dog, and the sharp husky bark of the boxer. Being so high above the world makes them feel invulnerable, omnipotent. I know. I feel it too, as I come up the road, winding my way into the sky. You can see almost 360° in every direction. Every kind of smell wafts up from below, the dank steam of the swamp, the mist of the fields, the fat grazing sheep. Every sound is amplified,  a passing creature, a rustle of leaves, boot scuffs on the road, the wind in the wires.

To the south of us are the cliffs high above the lake. This is what I wanted to capture in my drawing, “The Limer Dogs of Lockeberg”, that ancient feeling. I saw a myth. Limer dogs were scent hounds used in the Middle Ages. They were kept on leash to find the game, then the running hounds were sent out to bring it down. I gave the dogs Medieval collars. Limer comes from the French, limier, or lien, meaning ‘leash,’ or ‘bond’. The leash is an energetic link. I am bonded with the three dogs. The fourth dog is untethered. It completes the four elements of the world: wind, fire, earth, water.  Thinking, intuition, sensation, feeling. Originally, I thought of myself as the fourth dog, but strangely, this winter, a fourth dog arrived on the mountain, another foundling. So the four dogs complete the picture. 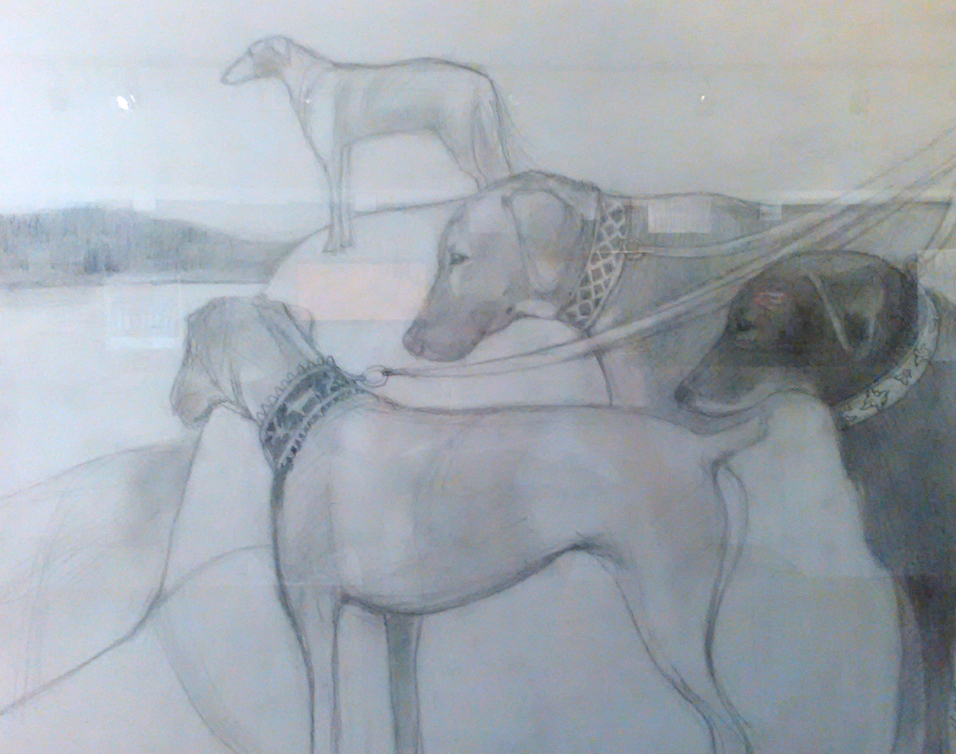 “The Limer Dogs of Lockeberg”, Pencil on paper, Erika Connor 2015