The lake sits below the mountain like a mirror.

I always feel like I’m in another country, one that does not exist anywhere. It is timeless. It’s like anything is possible, if I just step past my limits and have faith. The raven fledglings are dancing over my head, learning to fly.  I can feel the wind in their wings as they soar off the ledge, suspended over the lake. Sometimes the hills are reflected so perfectly in the stillness, that it’s hard to tell which world is more real. When you look at it sideways, it forms a whole: one land mass suspended in the water/sky. The wind makes silver patterns across the surface, travelling as it does through the grasses, running across, then lifting. The sun makes waves of gold, storm clouds stain deep purple, sunsets leave pink and red wakes. The water holds everything, the stars and the moon. When you see this you realize that everything is just a reflection. You want to hold it in one thought, but the mind can’t sustain this. It drifts and separates into two, inside, outside, with your self in the middle.

In the winter, the ice is tempered silver and metal, drifted in mosaic patterns. It looks like writing from above. I can see tracks, snowmobile circus loops, ski tracks, or foot prints along the edges, close to land. The deer are not afraid to go right across, in wavering lines, searching for cedar, and the coyote tracks follow, straight as an arrow. The lake is the place to find coyote kills, blood stains on the snow and blown fur.

I’ve heard the lake sing only once.  I thought it was wolves or owls, but it was the water slowly solidifying. It made the sound of a finger running slowly along a wine glass rim, round and round, until it rose into a high humming. It sounded like women crying, or whales. The voices got cut off. They were coming from deep rooms that were being shut off, one by one, as the water froze. And then, one day, the lake was a white open surface, a new land.

I gather snow for water, There are many kinds of snow, the new-fallen, fluffy snow, like dust. It must be pressed down to let out the air. There is heavy, wet snow, or granulated snow like salt crystals. There are ice crusts that have to be broken through to find the soft snow underneath. I fill the pots and put them on the stove. It takes a lot of snow to make water, and it takes a long time. A full pot melts down to a few cups. Sometimes, the water heats too much, and then I throw snow into the dishwater. When I’m at work, the fire dies and the pots stay filled with snow. It looks clean, but it is filled with seeds and small branches, feathers, hair…I think of my ancestors and how little they bathed in the winter and I understand.

The ice cracks like gunshots in the spring break-up. Then the water returns. The frogs make their bell-like music from the marsh, a song that expands and slowly rises in pitch to create harmonics in the layering. I try to sing the note to find the key, but it keeps changing, seems imperceptible. It puts me in a trance. It reminds me of the temples in India, where the singing went on and on all night, in and out of my sleep. Voices carry across the water. There are geese and ducks, kingfishers flashing under the cedars, blue herons, sometimes an eagle, and the ravens. In the summer there are motorboats and cottagers. I follow the track that weaves down the mountainside, always barefoot, because the pine needles and leaves are so slippery. I go from upper world to lower, passing under the pines. That is how I find the raven’s nest, the spots of white on the ground and the smell, then the sound of warbling, and looking up I see the giant woven nest and the little beaks poking over the side.

Down at the water, there’s an old dock that no one uses, of old furred wood with nails sticking out and one side sagging into the water. It is built like a raft, but is held down with giant rocks underneath, so it will never float off. Giant spiders live here and a black snake. Every year there’s a little fish that comes to lay her eggs in the shallows. She nips at my feet if I come too close. This is my bath place from end of May until October. The loons are out in the middle of the lake, watching me. I swim out towards them, until I can see where I live, the cliffs high above,  hidden behind bush, the thick groves of pine, the ravens floating above, staying close to their nest. I can’t see my cabin from here. It’s behind, to the east.

In the summer, the lake disappears behind a thick nest of leaves.

I have two water barrels that catch rain off the roof. They are often full, because it rains a lot in this country. The sound of pouring water is one of my soundtracks. One barrel I use for my garden. The other is for washing. I cover this with a screen to keep out insects and blowing pollen. By the time I get to the bottom it is green and growing algae. I scrub it clean and it fills again.

Rain water makes my hair soft. My hair has established its natural oil balance, so there’s no need to wash it more than once or twice a month. In the winter I take my clothes down to the laundry mat in the village. In the warm season, I wash them by hand in a large black animal trough.  I leave them in there with soap for days and they come out clean. The weather dictates when I will wash, and how to use up the water before the next rain. Every day, I fill a large pot of water from the barrels and carry it into the cabin. This habit has become ingrained in my muscles. People think I work out, but it’s the lifting of water that makes me strong. If there’s hot water I’ll use it.  Or I’ll save it. I learned to conserve water in Africa. You can only wash one hand at a time. One hand holds the cup and pours water slowly over the other hand. In Africa, it is a kind gesture to help wash someone else’s hands. There, they know how to pour water, from a boiling pot into a tiny tea cup, or from a full bucket carried on the head to a basin on the ground. No water escapes or burns.

How to hold water? Two barrels are enough. I have drinking water from the spring in the village. Twenty-five litres lasts about a week. The giant white plastic cistern under the cabin is no longer in use because it has mould and seems impossible to clean out. There’s also an old water pump at my sink that no longer works. The drain gets blocked and the pipe leaks, and reminds me of how much I dislike indoor plumbing. So the wash water gets tossed over the banister, clean and simple. When there’s a lot of water I feel rich. When there’s a drought, I look down at the lake and the incredible body of water. If I was an engineer, I would devise a system to pump water up a thousand feet. But I’m not.

So I wait and catch rain from the sky. 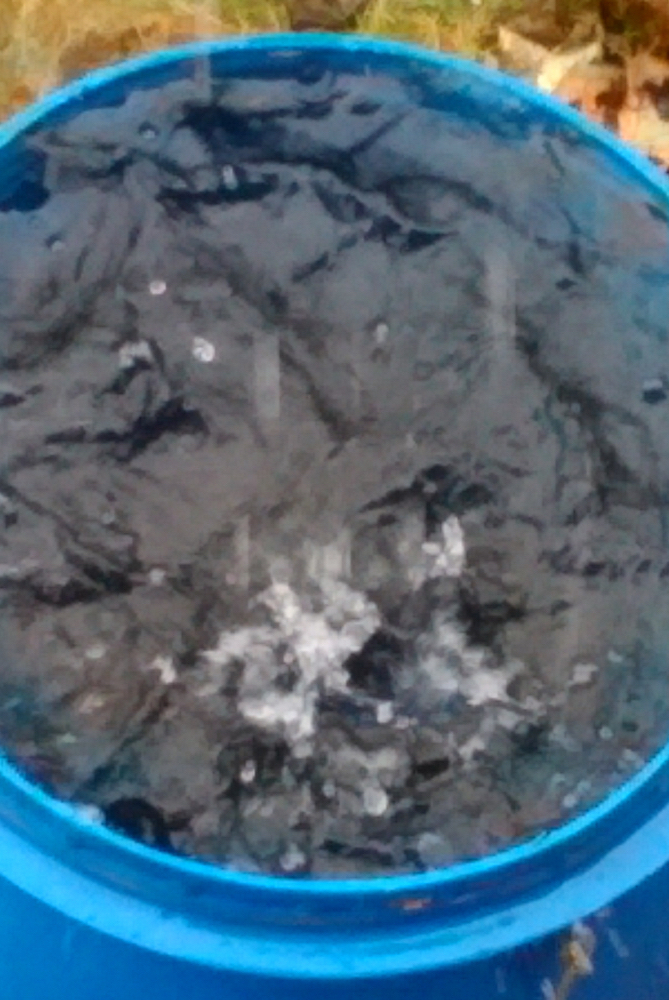