From the moment I met him I called him, ‘Lion Dog’. He would purr if he could.

Other dogs will come in greeting, then disengage, shake the energy off, and move on. He basks  in attention. He can never get enough. In the beginning this made me feel sad, this insatiable longing. Then I realized it was me, always  looking for a home to come from the outside, something that does not exist. His presence is so strong, you can not ignore him. In time, I have learned. The introvert perceives the outer object as a sensation in the body, an inner intensity, and is always reaching for it. The lion is the colour of gold. He embodies the earth, the senses, the realm of acceptance and rejection, the quest for balance, the bridge between the worlds. He is master of self-control. He is the sun king, but he rules the night.

Lion Dog was the first one to welcome me to the mountain. He would be there in the night when I opened the car door. Silent and gentle, curious. After I had settled in, with the fire going and candles lit, I would hear the soft slow pads of his feet on the porch steps.

I felt strange, like I had come on some long journey and finally reached the summit, only to find that I was utterly alone. The coyotes were calling from the dark valley.  It touched my loneliness. I stood on the veranda and howled back. Lion Dog flinched and swung his gaze at me. He was listening to the coyotes answer with ears perked and now he tensed up, watching me. I howled again, and he tilted his head back and a low moan came from deep inside him, rising in pitch until it broke into a strange yodel. He coughed a little, then tried again. I joined him, harmonizing my voice to his. This time our voices gained momentum and rose into a beautiful aching call that travelled far, lingering on the air, slowly trailing off. The coyotes heard and answered. Back and forth it went, the old ‘call and response’ song. I am here! I’d found my alter-ego.

We basked in the fire glow. Whenever I stopped petting him, he’d let me know, putting his paw on my hand, nudging me with his nose. I kept the fire going. It was October. I wondered if I had come to the right place. Would it be warm enough? Would I be okay? All the while, Lion Dog lay beside me, staring at the flames, sensing who I was. He got me through that first winter.

He has golden eyes and the softest ears. The white under his chin,  and down his chest and belly is as soft as rabbit fur. He has one small white spot on the top of his neck. He smells of sweet hay. He is the most laid-back dog I’ve ever met, with all the time in the world. 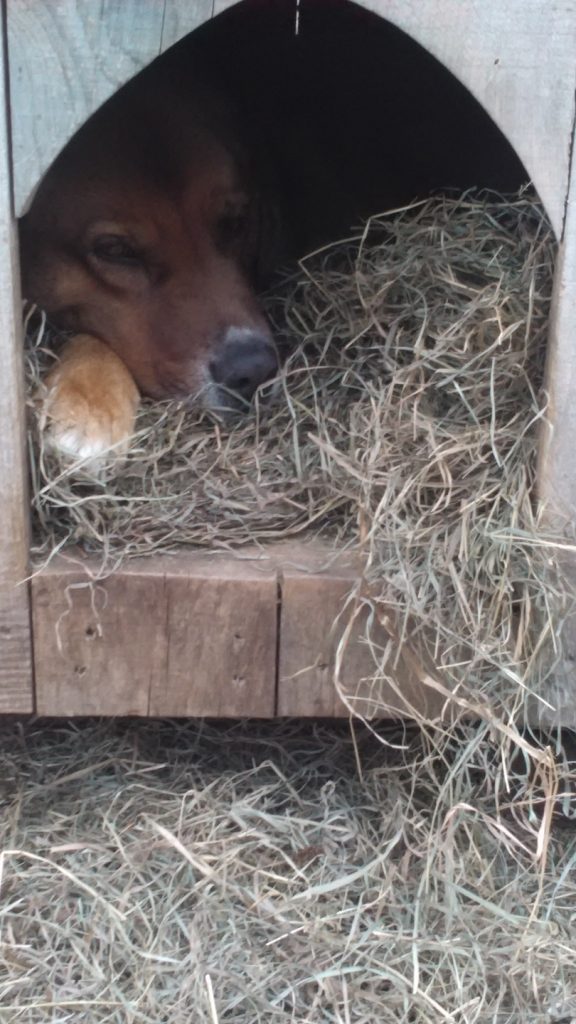 This gets him into trouble sometimes. He was lying under the truck, and as someone drove off the tires hit him on the back legs. He was badly bruised, nothing more. He was subdued, more than usual, but he would survive. He stayed in his house for days.

In the mornings, he goes trotting down the mountain. Sometimes I pass him on my way to work. He is both comical and dead serious, with a furrow on his brow. Where he goes is a mystery. He’s not like the other dogs. He follows his own rhythm. Later, I find him lying flat out in the sun in the middle of the driveway. He seems to be fast asleep, but one eye is open. There’s a chipmunk debating whether or not to cross, and Lion Dog is swift on his feet, tail up, whimpering, galloping through the forest, calling the other dogs. He’s always in the lead. He’s the best hunter. I’ll find his trophies on my walks: part of a leg, a piece of skin, a few feathers, clumps of hair, a chewed bone. When he’s got a bone, do not go near him.

He has the night watch. He stays out with the cats. I am part of his territory, just down the driveway from the farm. I hear him swish past my windows, a deep rumbling from his throat. Creatures hold their breath and  tiptoe along the invisible lines.

He is easy to tame, but the wild in him will always be there. He is startled by sudden movement. He’s afraid of doors. I have to entice him, with my hand held down near the floor, for him to step over the threshold and come in. He has the ability to go from high alert to to complete abandon. I am putting him to sleep. As I lift off my hand and go back to my work, his head rises from the floor and he stares at me. Sometimes, he’ll just get up and walk off into the night. When the moment comes, take it. When it  goes, live without it. You are both fierce and gentle. You are free. 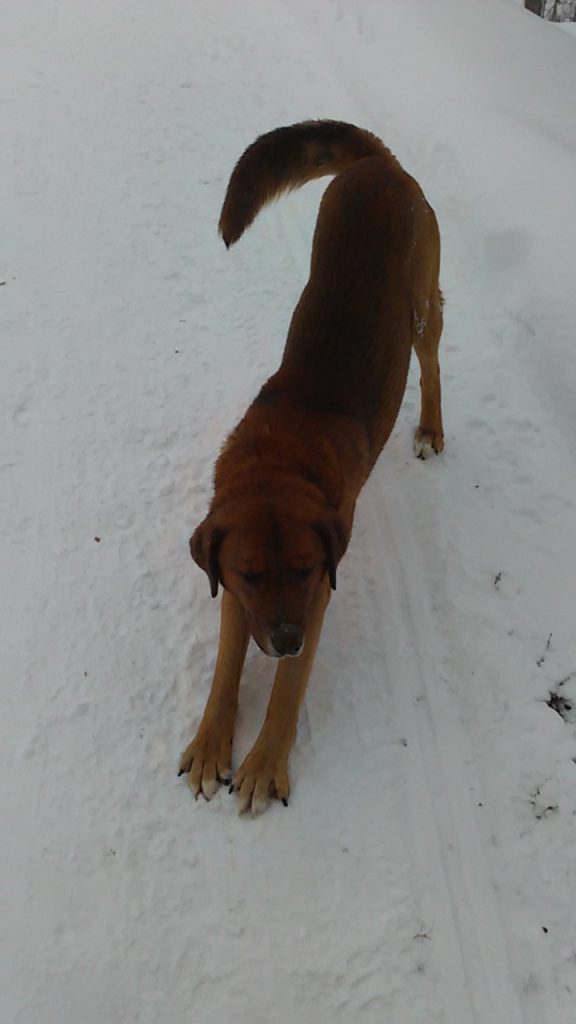