The coals stay lit from the beginning of November until the middle of May, almost like the ancient fires kept burning in the temples. a continuous line through time. Or like the live coals that were carried on prehistoric journeys, wrapped in grasses and birch bark. Each morning I rake the ashes and find the little red coals buried underneath. I align the kindling, fallen branches, and newspaper or birch bark or cardboard, so that the flames are fed, keeping the door slightly open, waiting. I build a fire house. Each one is different. It foretells the kind of day I’ll have.

Fire is my most precious element. Without it, I could not live here. It reflects the fire inside the body that consumes to create energy. It has a voice. It hisses softly, crackles, ticks like a clock. It can make the sound of an animal, like a high pitched squeal. It roars to life, and later, it settles into a steady humming for hours. It has the sweet smell of cedar, or maple sap, or the tar of birch paper, the spice of resin. It is many colours, gold and white, copper, indigo, and purple. Blue flames come from waxed cardboard, with the smell of plastic and inks. I throw my hair in and it sizzles and bubbles. Things are seen in the burning wood, creatures, script, strange images, old memories.  It draws me in. I find myself asking questions that no one else can answer. I think of people who are consumed with cancer around me, or those who have passed. Or people who have been burned at the stake, Joan of Arc…I wonder why the flames choose certain paths. Or how the fire can light itself, like a wind at my back while I work at my desk. When it joins me, I feel safe, no longer alone. Each fire is different. It depends on the weather. It depends on my mood.  Blowing winds hold it down. Winds comes searching down the chimney. Or I hear rain drops hitting the stove pipe. Rain dowses the spirit.  It depends on the fuel.

I have burned every kind of wood. Butternut from the old tree that came down last year, maple, oak, birch, ironwood. One year I had ash. It spilt so perfectly down the grain, and burned hot. 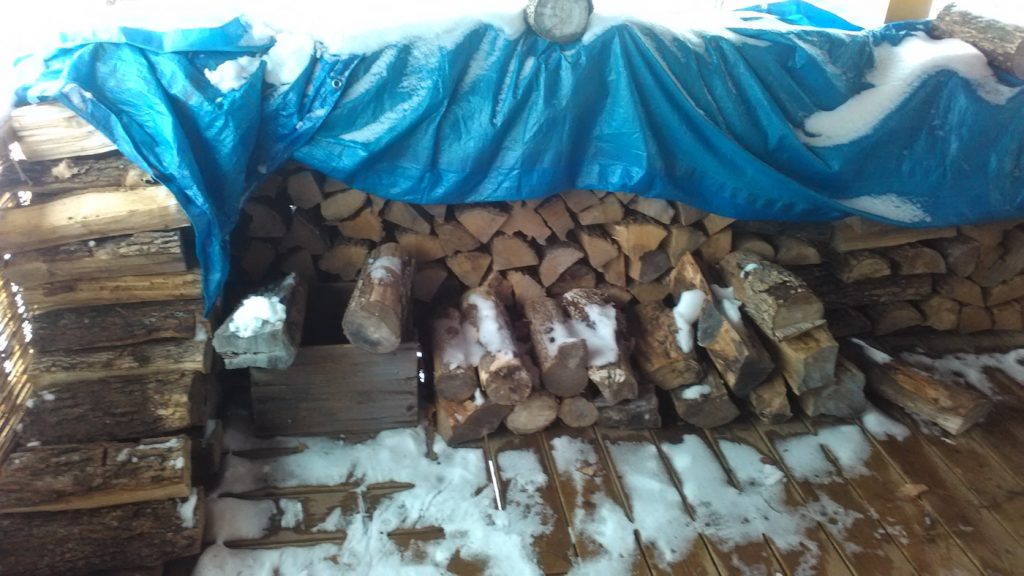 I buy eight or nine cords of wood, in stages, because I can’t buy it all at once.  It comes in pick-ups, up the long winding road. The men go into the bush and cut the wood every season. They cut it for sale and for themselves, in between their other jobs and their families. It amazes me, the monumental work they do for so little money. Self-sufficiency is the highest honour, and this has not changed for hundreds of years. They have weathered hands and scars. They have lost fingers. One man lives alone on a farm inherited from his father, and his grandfather before him. I can see his farm from the cliffs, the white silos in the green valley. He’s worked hard his whole life and now that the farm is his, he’s downsizing, selling off his beef cattle and the last of his wood. He prefers the oil furnace and the company of his dogs. One man is a mechanic. He says he also has an off-grid cabin up north, but I see his system is much more elaborate. He talks about putting a fan in the stove to generate energy, or hooking up batteries, or how to use propane and generators. They are old and young, honest, solid, soft-spoken. We unload the wood together onto my driveway. Then they cover it well with my blue tarp, and toss a few logs across to hold it down in the wind. I hand them the cash and they fold it and put it in their jeans pocket. With this wood I have another winter.

They say there are three fires: the first one is the heat you generate when you stack your wood day after day, the second is the sweat from splitting the wood and bringing it in, and the third one is the fire finally lit in the stove. I stack my wood like my father taught me, with the end logs perpendicular to the vertical logs in the middle. The finished wood pile is like a sculpture. All the different shapes fit together like a puzzle. I just want to look at it and not touch it.

I split as I go. I have split my wood at night after work, with a headlamp, or worse, in a snow storm. It takes concentrated force and an eye on where the blade will hit. It takes will power. Sometimes the log doesn’t stand, or it takes several swings, or I keep missing the notch, or the axe gets stuck. Any anger or frustration is dispelled in the axe flying through time, with the contact of metal to wood, and the satisfying sound of the strike that splits the grain and the log in half. The axe slices into the earth. It’s not my favourite thing. My axe is frayed at the handle. Oak and ironwood are the hardest. Some wood is so knotted and deformed that there’s no point in even trying. I leave them for my fire pit. Every spring I end up with a pile of huge knotted logs. Why do I keep putting the biggest ones on the bottom?

It’s taken me three winters to understand my stove, a Kingsman. It was October when I moved in, and I sat in front of the huge box stove and felt the cold on my back like a damp cloak. It wasn’t throwing enough heat.  I had a dream there were gaps in the wall planks and the cold was streaming in, and it was too late to turn back. It turned out that there was truth to this. It was the coldest winter on record, -35°C for months. I had come from a one-room plywood cabin in the forest to a two-floor cabin that was lifted onto piles, on an open mountain. I had been familiar with a small Fisher stove. This stove was bigger and required more food and bigger fires. Also, it was not cast iron, but some newer kind of metal. I didn’t like it. It felt like no matter what I did the stove would not heat up. I called my cabin, ‘the ice house’. Was this because I felt unsettled, living in the past?  Had I lost my fire somewhere along the way? What was I doing here?

Once I rescued starling babies that fell down the chimney in the spring. I brought them out all covered in ash and let them go. Once I almost had a chimney fire, a banging and clattering of particles up the chimney, and a woosh, like an escaping spirit. I ran out to see small flames coming from the chimney cap. I panicked, grabbed the logs from the stove with the tongs and threw them out into the snow. I left the door open and prayed. Black pieces of char and sparks flew out the chimney top and the wind carried them away. Then everything went quiet, but for the logs still sizzling in the snow and the uneven sound of my breath. In the old days, houses burned down.

I turn my head and my headlamp catches on a wall of smoke. I’ve left the stove door open again and there’s a log smoking the room. So all the windows and the door come open to the winter night and I’m cursing, waving the smoke out with a towel, like they do in Africa to wave out the mosquitos. I see the humour. I learn as I go. I change my thoughts.

A tree once stood rooted to the ground. It held birds in its crown and moved to the winds. It beheld the storms and the lightening snakes. It sheltered someone. It grew old, was brought down by a blade and it continues to live. The wood burns, following the lines of insects. The insects have followed some scent of fragmentation. The bark slips off like skin. Splintered wood catches like frayed hair. That wood is brought down through its layers of years, ring by ring, back through time. The solid form transmutes to ash. The ashes are carried in a black enamel pot and left to cool on the snow away from the cabin. Later, they will go back to the earth.

The doors open up across the words and separate the king from the man, and close again to form a whole. 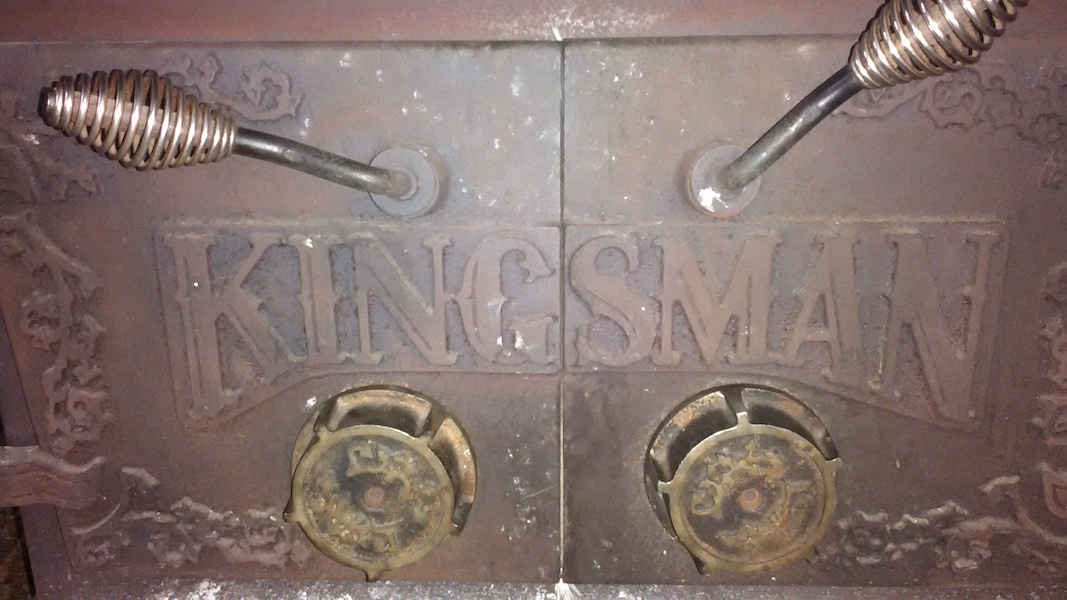