I met them in October. They were lying on ample cushions on the floor -the biggest dog cushions I’ve ever seen-, and the woman was making coffee.

They were my first clients as a dog walker, and my first experience of Deerhounds. They met me at the door, pushed me aside and went to stand on the driveway.  They didn’t do anything, just stood there like statues. I walked up the hill under the pines towards the leafy forest. I expected them to follow, but they were still on the driveway staring up at me. They became smaller and smaller as I walked to the edge of the forest. I called, whistled, pleaded. They never moved. So I went into the trees and sat on a log. After some time, I heard the jingle of a collar. I peeked out and saw them wandering down to my car. I waited. Then I heard a rustling through the branches. I looked down at the driveway. It was empty. I saw a movement through the forest to the left. They were fluid like the shadows, nimble-footed, swift and silent.

They came on each side of me and leaned against me. My hands came to rest naturally on their necks, like they were the arms of a chair. I thought it was an ancient gesture,  that this was the way you walked with your dogs in the Middle Ages.

The  three acres of land was enclosed by an eight-foot fence, so I walked along the parametres and they followed. Brouillard, French for ‘fog’, stood beside me whenever I stopped, leaning against my hip, staring out. He had a way of sighing that I found haunting, as if he was breathing something unseen. It put me on edge. I was waiting for something to happen but it never did. The other dog, Louis, trotted on ahead. We started and stopped. I wandered off the pathway, and wove in and out of the groves, over logs, and under fallen trees. Louis sometimes came or went off on his own. Brouillard always stayed with me, waiting for me to decide which way to go. I showed them the deer pellets and they sniffed it. In ancient times they would have been taught to hunt. and I thought of the power in their bodies that I had not yet seen it. What would happen if I ran?

I ran down the hill as fast as I could, leapt a log and continued running until I had rounded a bend. I looked back. Nothing. Then suddenly I heard the thundering, jingling, flat-out galloping. I leapt behind a tree and they rushed past me like a torrent of water, streaks of silver and black. Then they slowed and came to a stop and faced each other. They stood there very still, not looking at each other, Louis’ eyebrows were lifted and held. No sound. Two knights waiting for the signal of the joust. I couldn’t see the sign. There was an explosion of energy. They whirled into a frenzy of snarling and lion growls, legs and necks intertwined, long claws scarping, canines barred. Then it was over and they looked at me placidly and sighed.

I was afraid to touch them, as if I might offend them. I had read that these dogs were aloof and independent, not openly affectionate. They would not fetch or play.  I was intimidated by them. When we came back to the house, Louis suddenly leapt into full gallop and raced around the house five times., so fast, so long-legged, fully extended, a wisp of smoke.

I associate them now with the cedar forest. There is a gully carpeted in orange needles where tall cedars reach into the sky like spires. The Deerhounds float on air. They go from a blur of speed to deadpan calm. They are so long, they wrap around me. They are gentle giants, regal and elegant, and they are also clowns. 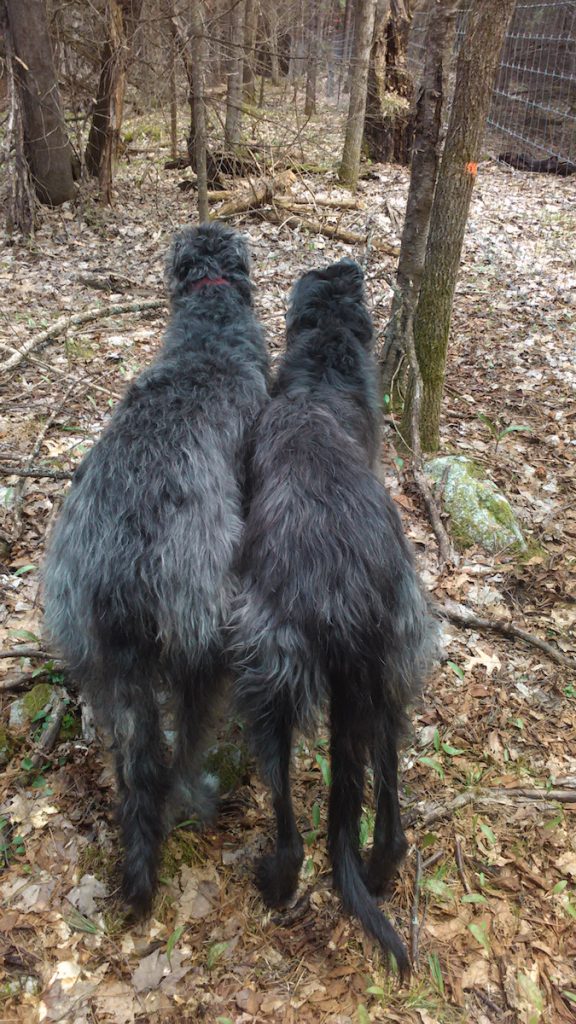