Of all the dogs on the mountain, the boxer has the greatest heart.

He is, by far, the most beautifully-shaped. Small wide head, long neck, sloping haunches, long legs, four dainty white paws and a smooth cinnamon brindle coat, but his elegance is eclipsed by a flat flappy snout, wide saucer eyes, and clownish face. I held it against him in the beginning. I hope I am forgiven.

I began to notice how he always turned up at my door whenever I was sad or lonely. It went with the weather, the rain and the snow storms. I felt his misery of being out in the elements, without a coat to protect him. I thought about where he’d come from, and how he might still be lost if he hadn’t found this mountain paradise. He went straight to the wood stove and held his face up to the vents. If the doors were open, he’d lean towards the fire as if he wanted to crawl in. I came to join him and he sat on my lap. So we looked at the flames. It was the sun. We had this understanding about the cold and the dark, and  how fire restored you. For all his craziness, he had an energy of stillness. I  left a cushion for him by the stove, with a sleeping bag. If it was really cold, I wrapped him up and he slept for hours while I wrote. He was my comfort.  He was free to go, but he stayed.

I hear him coming by his loud snuffling, then the clattering up my stairs. He does a little dance, stepping with his white paws, touching my hands, spinning around.

He finds a rectangle of sun on the porch and lies down. The light on his hide reminds me of Africa, the white is so bright on his breast, like liquid lead, on his four white socks, on the pink nails, on the stripe between his eyes to the wrinkles on the bridge of his nose, on the skin under his chin and his formidable black snout. His smooth short-haired body gleams like a skin, with its flame pattern of orange and black. The rims of his eyes are lit and I notice the little twitch of his nose. His eyes are half closed. The lashes are dropping. He is soaking in the sun the way he does with fire. He is my muse.

Sometimes, I’ll be sitting on the cliffs, watching the sunset, and he’ll come and sit with me. I love how he surveys the distance, how he stands on the highest rock over the abyss, sure-footed, with his elegant hind limbs out-stretched. 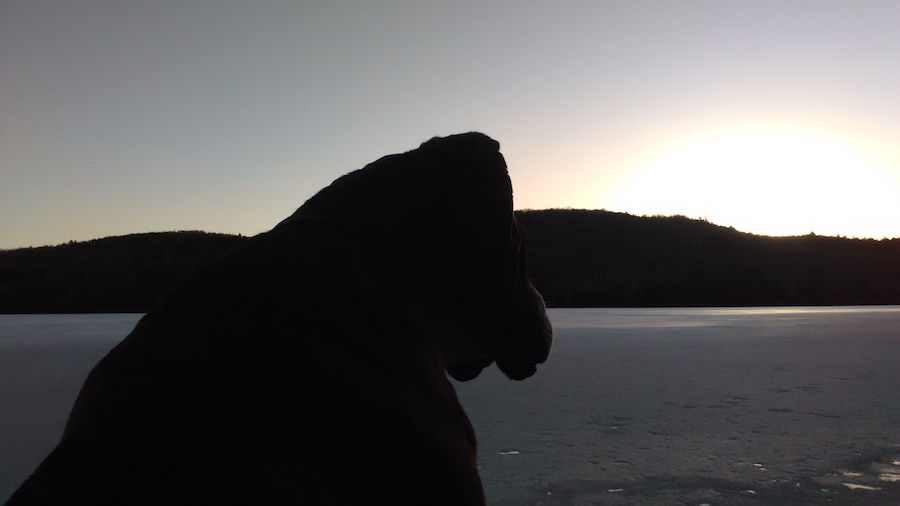 He had just been rescued when I first came.  He was wiry and young,  wide-eyed, unpredictable. He ran at me and boxed me in the legs, tried to knock me over. He sprung up like a bouncing ball and snatched at my hands. He stole my cheese, went through my garbage and left it lying on my driveway. He found every bone I threw down the mountain.

I woke up with a start. Something was out there. I heard the dogs yelping and baying, running for the hunt. I went back to sleep, leaving the door open to the warm spring night. Moments later, the boxer ran back in, snorting and fuming like a dragon. He was spinning through the room, and before I could stop him, he was driving his face into my bedclothes, along the mattress and couch, any surface he could use to wipe off the overpowering smell. The air was thick with it, shocking.

“Out!” I yelled at the top of my voice, and he fled, tail clamped, haunches low, but it was too late. I’d been skunked.

When you live off-grid, this is a disaster. No washing machine, no running water. It’s four o’clock in the morning…Everything came out, blankets, sheets, pillows,  clothes, onto the balcony railing and clotheslines. All the windows were open. Cinnamon and cloves were simmering on the stove. I washed the floor near my bed with vinegar. I burned tobacco leaves, and Frankincense from the monks of the Abbey of Prinknash. But there is one humble creature with the greatest perfume of them all. It has no enemies. I fell asleep with the smell of skunk in my hair.

He has also been quilled three times. I kept a little bottle of quills; I was going to make an amulet for him, but then I left it alone.

In the end, there is nothing more comforting than watching a dog sleep, curled on his cushion by the fire. It gives me the greatest peace. 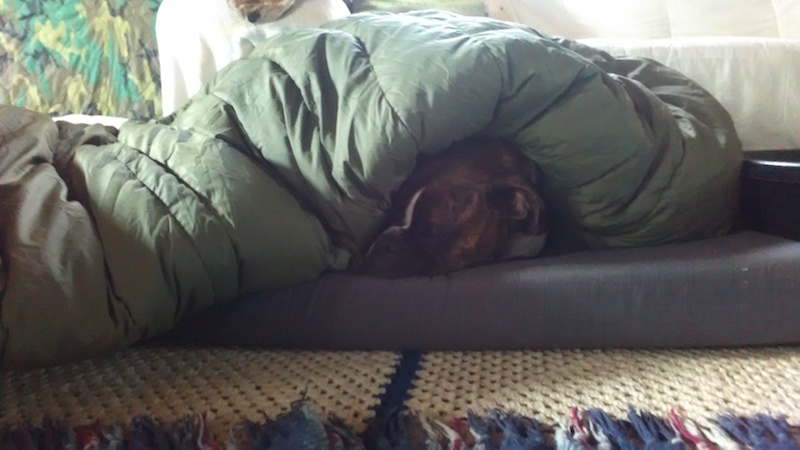