Saplings nod and bob like little green people on the forest floor. One day, they will be trees.

I am on top of a small mountain and the trees grow up on every side. Fifty years ago, it was open and the cows were grazing up these slopes. I see this happening on the cliffs behind me where the neighbour’s goats and donkey graze. They create a beautiful tended lawn among the sculpted rocks, where you can sit and contemplate, looking down at the lake. But take away the goats and it will go wild again. Where there is space, there is light and rain. The earth is just waiting. The trees will conquer.

I was just another seed floating in on some wind, coming down to settle, taking.my place. The first year I cleared, cutting back the overgrowth. The little maple seedlings I pulled by hand. The saplings I cut with shears. The infant trees were too thick, so I pruned the branches. The trees reached out to the cabin, grazing its walls. They climbed up to fill my eastern window onto the valley. They wanted to fill the sky.

You can not prune trees. Or can you? I thought of the herder women I’d seen in Rajasthan, in their glowing red saris, climbing barefoot up the trees with their hatchets to cut fodder for their goats. Every day the trees took on new shapes. They were sculptures. Sometimes there was hardly a lush branch left. I thought they were dead. Then they grew back.

My front lawn is lush with plantain, jewelweed and water mint. All around the cabin there is a carpet of wild flowers: milkweed, daisies, Queen Anne’s Lace, buttercups.  Each plant and flower has its season. When one flower dies off, another kind comes, so it is like a story being written and each character has a voice. They are different tribes and each one has its territory. To say one is a native species and another is foreign has no real truth. What is wild and what is domestic? Who came first and how did they arrive? Many of the plants I think of as wild were brought over from Europe as food and medicine: dandelion, Queen Anne’s lace or wild carrot, clover, mullein. The plants show traces or tracks. Seeds are carried on the wind or by animals, or people. Some plants take over another’s territory, or they work together.  Wherever I walk I press plants down and discourage their growth. I leave paths by my daily habits. Anything I put on the land, a bucket, a tarp, my wood pile, will block the light and the air. Ammonia from urine kills the plants outright. This is the dilemma. To make a garden you have to uproot plants, disturb ant hills, reroute worms and salamanders, dig out rocks…

The farm animals came down from time to time to snatch at the best grass, the geese, the chickens, Smokie, the pig, Violetta, the donkey, but not enough to mow the lawn. I used the old rusty push-me-pull-you lawn mower and mowed a path around the cabin to the fire pit, and around to the gardens. In this way, I kept the fields of wild flowers. I cleared the rock outcrop and swept it, so that the moss shone in the sunlight that filtered down through the leaves and the rock face appeared like a sculpture. I untangled the ferns by the cabin walls. I took the saplings I had cut and wove fences, like I had seen in Sweden in my childhood, using the sturdy branches for the warp and the pliable branches for the weft. Weaving over, under, over under, I enclosed my gardens. 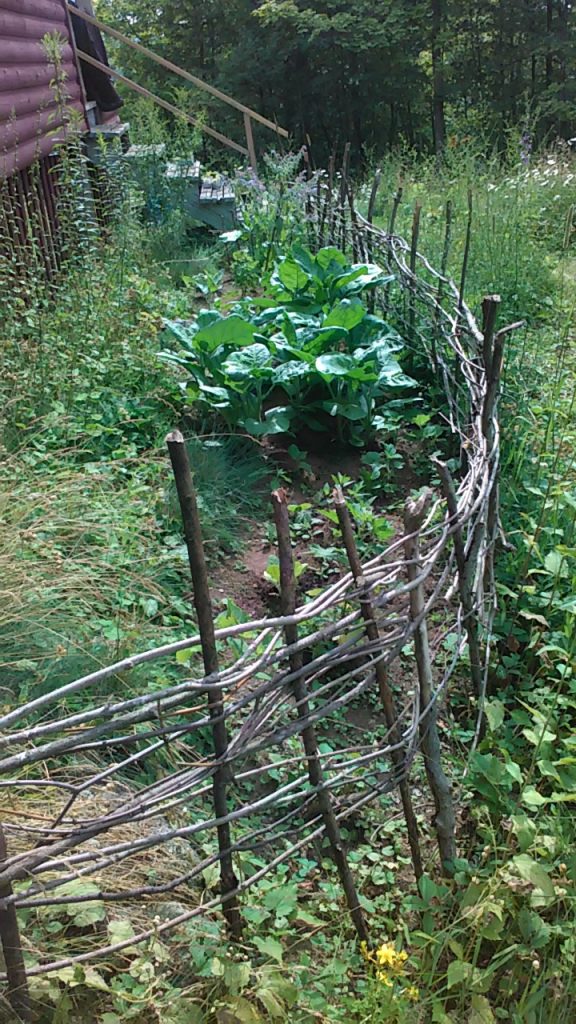 I worked at loosening the hard clay. I pulled out chicory roots. Only some, because the field of sky blue flowers was so beautiful in August. I mixed topsoil and compost into the clay, and manure from my neighbour’s goats. I watered by hand, carrying buckets from my rain barrels. And my plants grew: squash, cucumbers, tomatoes, potatoes, kale, onions. I sowed twenty garlic bulbs in the fall and covered them with dried grasses. There they lay all winter, under the snow. They slept through the dark season, and miraculously appeared in the spring. I harvested them and wove the stalks together and hung them in my kitchen. They were like gold.

I grew local tobacco, They had the tiniest seeds, like little grains of sand, and yet they grew into monumental beings, with leaves bigger than my hands. In the evenings, a sweet spicy smell rose from their yellow bell flowers. They took up a huge amount of space. I pruned them, picking off the secondary sprouts and the sticky nicotine sap came off on my fingers. I didn’t think any insect would touch them, but the earwigs munched happily on the leaves. It is an ancient hallucinogen. Even the insects like to dream. 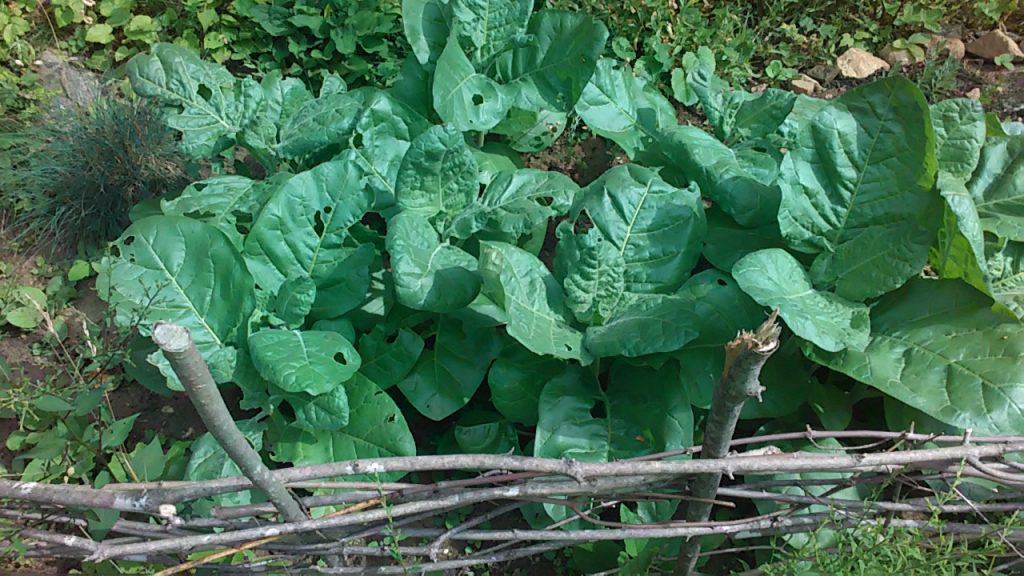 The earwigs ate my spinach and kale. The earth cracked like the plains of Africa. When I didn’t have enough water, I sprinkled the plants, hoping they had become hardy enough. I thought about how the domestic plants need to be tended to, while the wild ones follow the natural cycles. They wait for the rain. They dig their roots deeper. They hold out. They have a resilience that comes from their ability to bend without breaking. 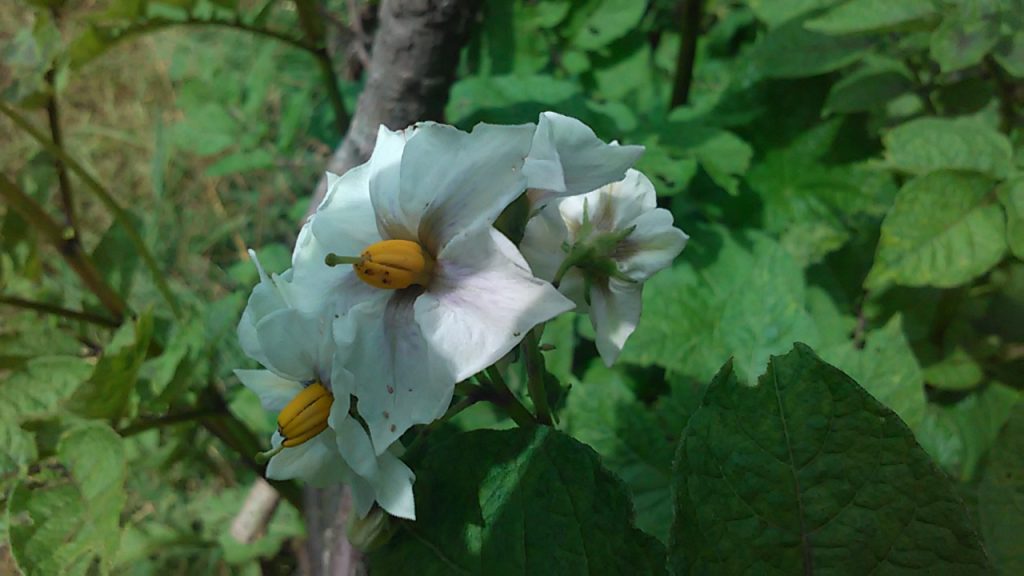 The land is a room beyond my house. I know every inch of the parameter. At night, the worms and centipedes come to surface, gleaming in my headlamp, rolling and plunging in the earth like it’s water.

I have eaten from my gardens and from the wild plants: I put plantain leaves in my salads and used them for insect bites and wounds. I sprinkled the grains in my porridge. I ate dandelion leaves and fried up the flowers. I made mullein tea and mullein stalk lamps, and milkweed cordage, mint tea, birch leaf tea. I ate strawberries and spruce sprouts. The land has changed me as I have changed it.

Every year a single red poppy arrives like a queen. Only one. Now I see eight new pods have sprung up around her. That makes nine, an indivisible number and the one that leads back to zero and a whole new sequence.  It won’t be long before my window onto the valley closes up completely. The garden was wild when I came, and it will  fill the space when I’m gone. But maybe there is a trace of me. 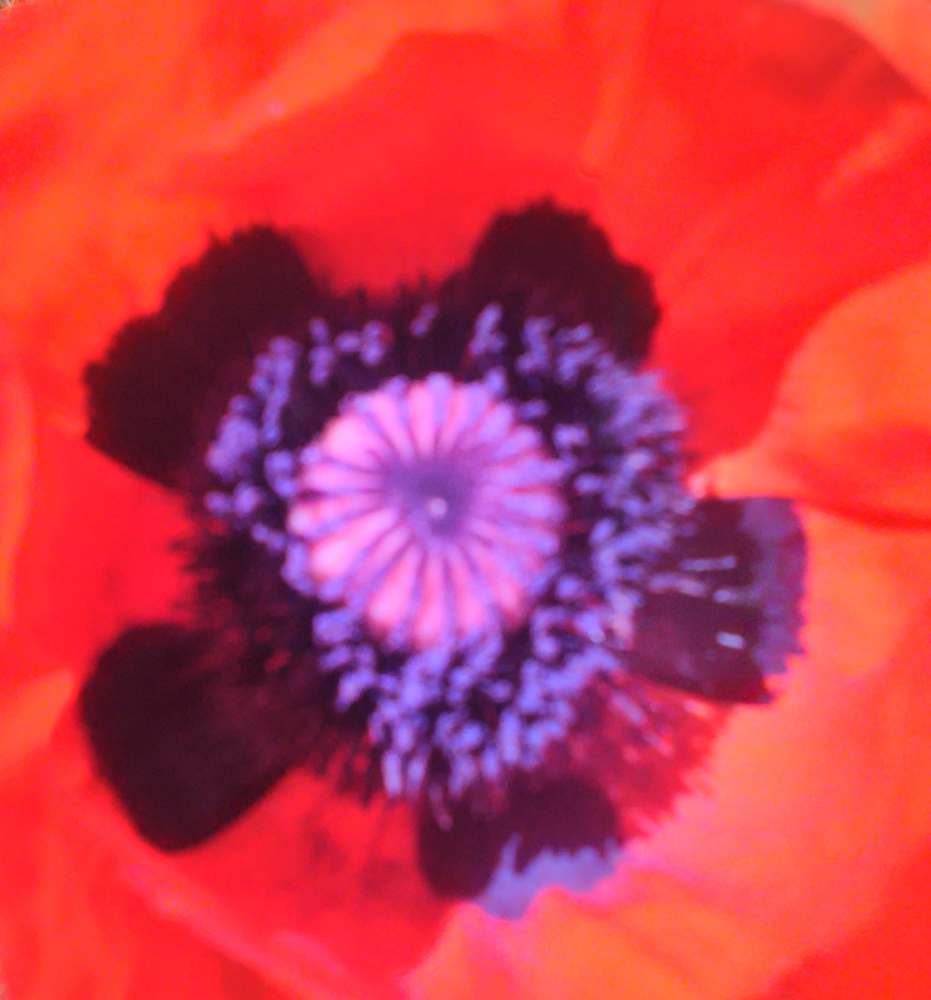