I live up here with the vultures.

Every morning, like clockwork, the wind comes up from the lake and cools the air. The wind blows away the poor mosquitoes. It pushes my door open, and comes through the windows. It dries out masking tape and duct tape, pulls out tacks. Papers and photos go flying around. It rattles the windows in their casings on the south wall. The old caulking, scorched by the full sun, is crumbling loose and one of these days the windows are going to fall out. Tools creak on their nails underneath the cabin. Wind blows my clothes off the line. Things go missing. The turbine vent on the roof spins round and round, clattering like a prayer wheel.

Living in the sky has its advantages. I am untouched by flood. Any calamities that could happen below would go unregistered from above. Sometimes the whole valley simply disappears into mist. I feel safe. Except, in a storm. Then, the blowing winds pry at the roof and the cabin shakes on its legs. Trees bow and snap. Thunder and lightening comes down on my head and I think: there is nowhere to run to.

It was 17°C on my first Christmas Eve at the cabin. My mother came to visit, bringing a cooler filled with our favourite Christmas dinner, pickled herring, Swedish meatballs, beet salad. The ice was melting. We were sitting on the porch with friends, in our shirt sleeves and bare feet, enjoying the sun, drinking mugs of mulled wine. Neighbours soon joined us with three goats in tow, and the scene became a comedy of clattering hooves on the floor planks, bleating and snuffling, goats trying to climb onto our chairs, and eat the crackers and cheese, sticking their beards in the dip. We laughed. They were the incarnation of the Julbock, the Yule goats of Scandinavia. We always had a large straw-woven goat under the Christmas tree with a red ribbon around its neck. It is a reminder of the worship of Thor, the sky god who travelled in a chariot pulled by two goats. He was a blacksmith. When he hammered on his anvil the sky echoed with thunder and lightening.

As darkness fell, we lit the candles and laid out our feast. I am so grateful to my mother for instilling the old traditions in me. Our faces illuminated with soft light, the shadows on the old wooden walls and ceiling,  the silence of a house without pipes or wires, all set the atmosphere. Form met function. It was real.

My mother had brought a summer sleeping bag and said she would be fine on the Coleman camp cot. She is my lovely Viking Mother! At 4 am the wind began to gust from the north. I heard my mother shifting on the cot. She must have been cold, but she never complained. I got up to stoke the stove. The wind was battering the walls and the cold came in. The temperature dropped 30 degrees. I threw an army sleeping bag over my mother, and we fell back to sleep. That’s how fast the wind can change.

In ancient times, the wind was often linked to spirits or demons. For me, the essence of torment is still air. Dark Matter is a mystery, and it takes up a huge part of the universe. Einstein said that ’empty space’ does not dilute or fill in as the universe expands. It has its own energy, and it’s possible for more space to come into existence. I relate this to my depression. Somehow the space gets formed in me and I don’t know how to fill it. I have struggled with this for as long as I can remember. I never know when it will come. Dead air. Nothing moves. Nothing has meaning. You see and hear and touch, but it does not connect. It is existential, mechanical. It is both the feeling of being squashed out of existence, and being extended too far. Too much space inside the form creates an incredible pull. Maybe I should see it as expansion, not contraction.

In early June, the silk winds bring the fireflies. Sometimes they find their way into the cabin, and I fall asleep to tiny blinking lights, lighting my way to the underworld. By day, the south winds warm the lake and bring the dragonflies.

I write well by wind. The thoughts come like the birds. The ancient Mesopotamian Bird Goddess was associated with the wind. She had bird-like features and bird’s feet. She came and she went.

The cloud formations here are the most beautiful I’ve seen anywhere. They come looming over me. I feel like their passing is just a breadth from the top of my head. Wind is my favourite. It has an association with distance and flying. I watch how the birds do it. The vultures find the thermals from the cliffs and are held without having to flap their wings. They fly on a ‘dihedral’. The word comes from the Greek, ‘di’ meaning ‘two’, and ‘hedra’, meaning ‘seat’. Like a plane, the wings are held at a certain angle from the body to determine the centre of gravity.

I have a bird’s eye view. I can see the lights of three ski hills, the radio towers,  the lake, the barn roofs of my neighbours, the road and the tiny moving cars. I see horses grazing two kilometres away. I feel the space inside me. Then one day, the mountain is a nest and everything is blotted out. But I have the rush of wind through leaves.  I have one window left, looking east. The sun rose directly in this space between the trees and came into the cabin and woke me with the light. I looked at those distant hills and felt the pull, like this was all just temporary, and I was meant to move on. In alchemy, there is the paradox of squaring the circle.  The self is the eternal circle held in the earthly world. You want to stay and you want to go. 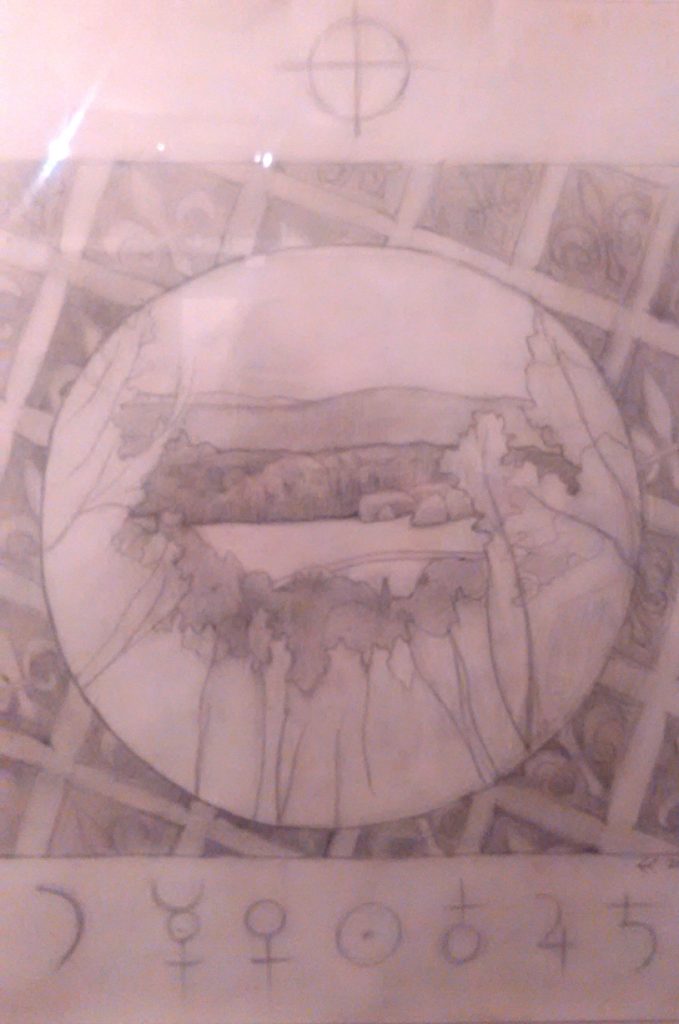