(This is a draft from 2018 that I never published. I was in Andalusia from mid December 2017 to mid January 2018. Now that it’s 2021 and the world has been highjacked, I feel the need to live vicariously through my travel memories. Am I now an armchair traveller? LOL! One day I will travel again!)

I lived in a little caravan under the olives. I slept with the horses, with the smell of them, their thudding hooves in the night, sometimes a cough. We slept under the moon and the rain, under the stars so sharp and clear. I could see Orion. 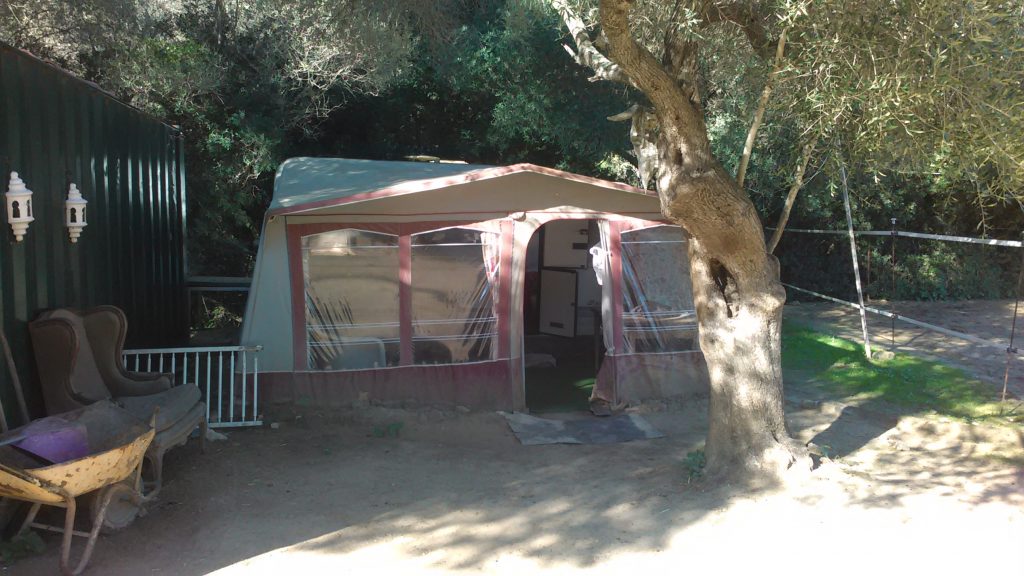 Once I heard thundering and ran out to scan the darkness. Eyes gleamed in my headlamp. They were all there, the two brown mares closest to me, the lone dark mare in the far paddock, and the white Andalusian stallion on his high hill, glowing like a ghost. It was here in Andalusia that I processed my Camino de Santiago. I didn’t realize how much it would affect me, walking 20-25 kilometres a day for a month, carrying my pack 790 kilometres across northern Spain. What was I thinking- that I’d be able to work on a farm so soon after? But here I was, sick as a dog -my whole body ached, my lungs filled with phlegm. I was sleepwalking in this place of olive trees and clay, translucent mountains, rays of sun and silver-lit clouds. The sky was like glass. There was a tinkling of sheep, always. My job was to take care of four horses, five dogs, a parrot and a cat. But maybe they took care of me instead. 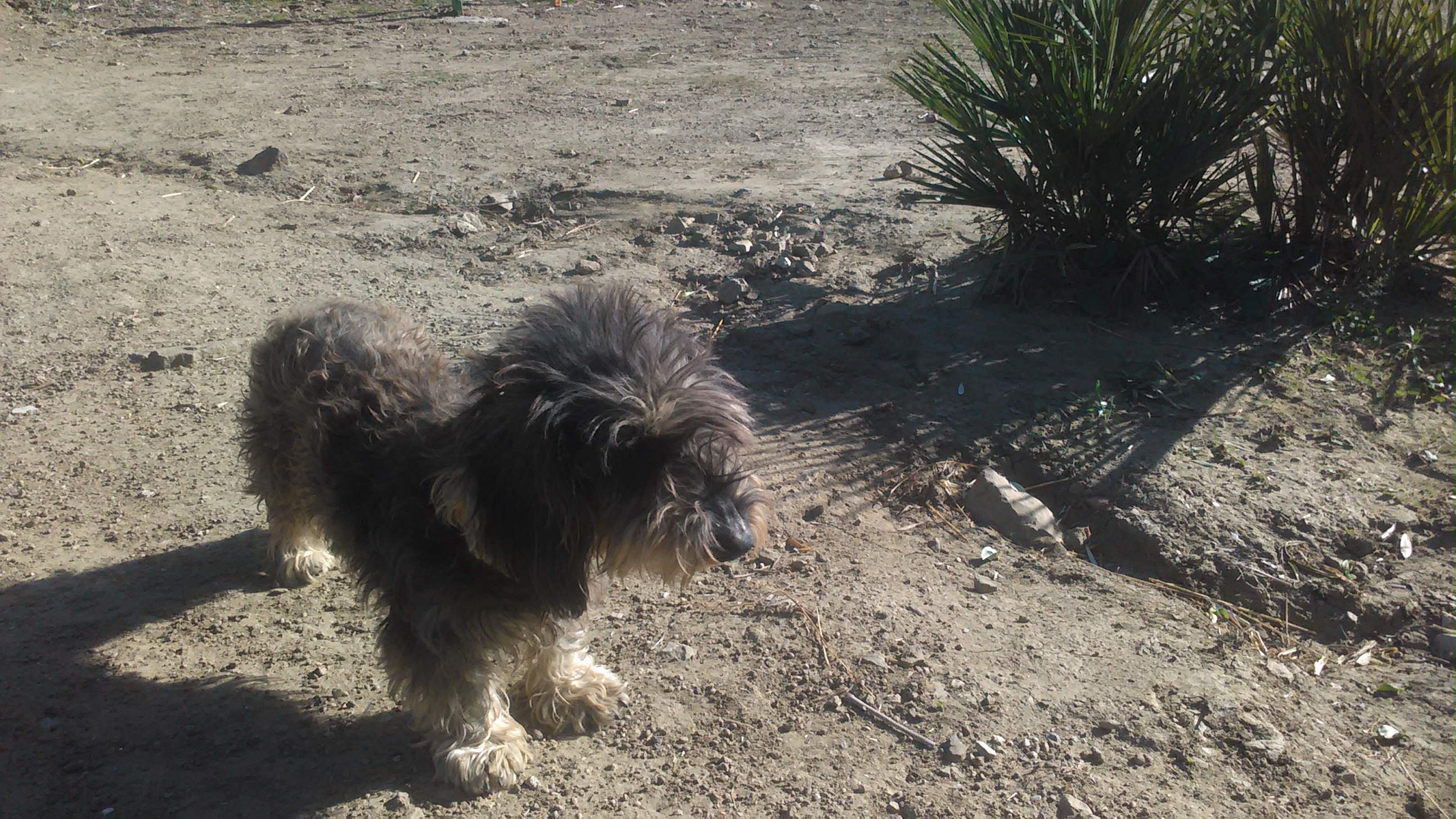 Mousie, the little wire-haired dachshund followed me faithfully as I took grain and hay to the horses, filled water buckets and cleaned the paddocks. She was my anchor. Her love made me stronger. She made me laugh each time she ran into the tack shed and snuffled in the corners, looking for mice. In the afternoon lull she leapt onto my lap and laid her head on my knees. I noticed her heartbeat, like a bird behind a cage walking in circles under my hand. But it was my heart not hers. I had something like pneumonia. The doctor didn’t say, but I know how I felt. She prescribed antibiotics. Every time I took the wheel barrow down to the manure pile at the end of the property I had to rest, crouched on my knees, catching my breath, staring up at the incredible rock face of La Sierra Crestellina, a sanctuary for griffon vultures. Sometimes I saw the great birds floating along the ridges. The cliff was a living face, always changing its moods. Sometimes it was lit up golden, or it was chalk white with illuminated blue dust crevices. Or the clouds came inside them, making them soft and mossy. It was January and the sun shone every day and I worked in a t-shirt. It rained very rarely, but when it did it came in torrents, pooling on the clay surface. I slid and clumped along with clay clinging to my boots like wet cement. 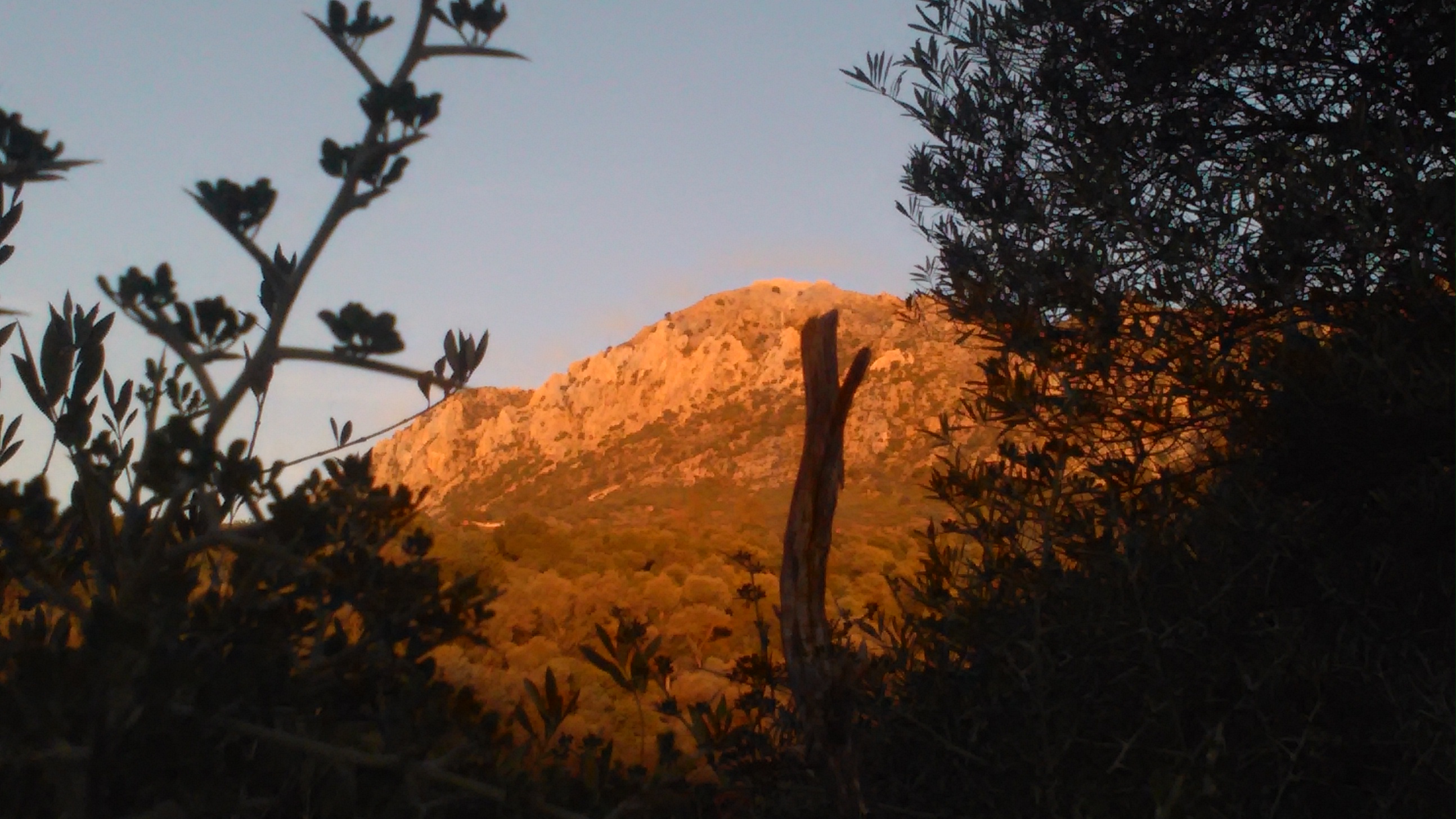 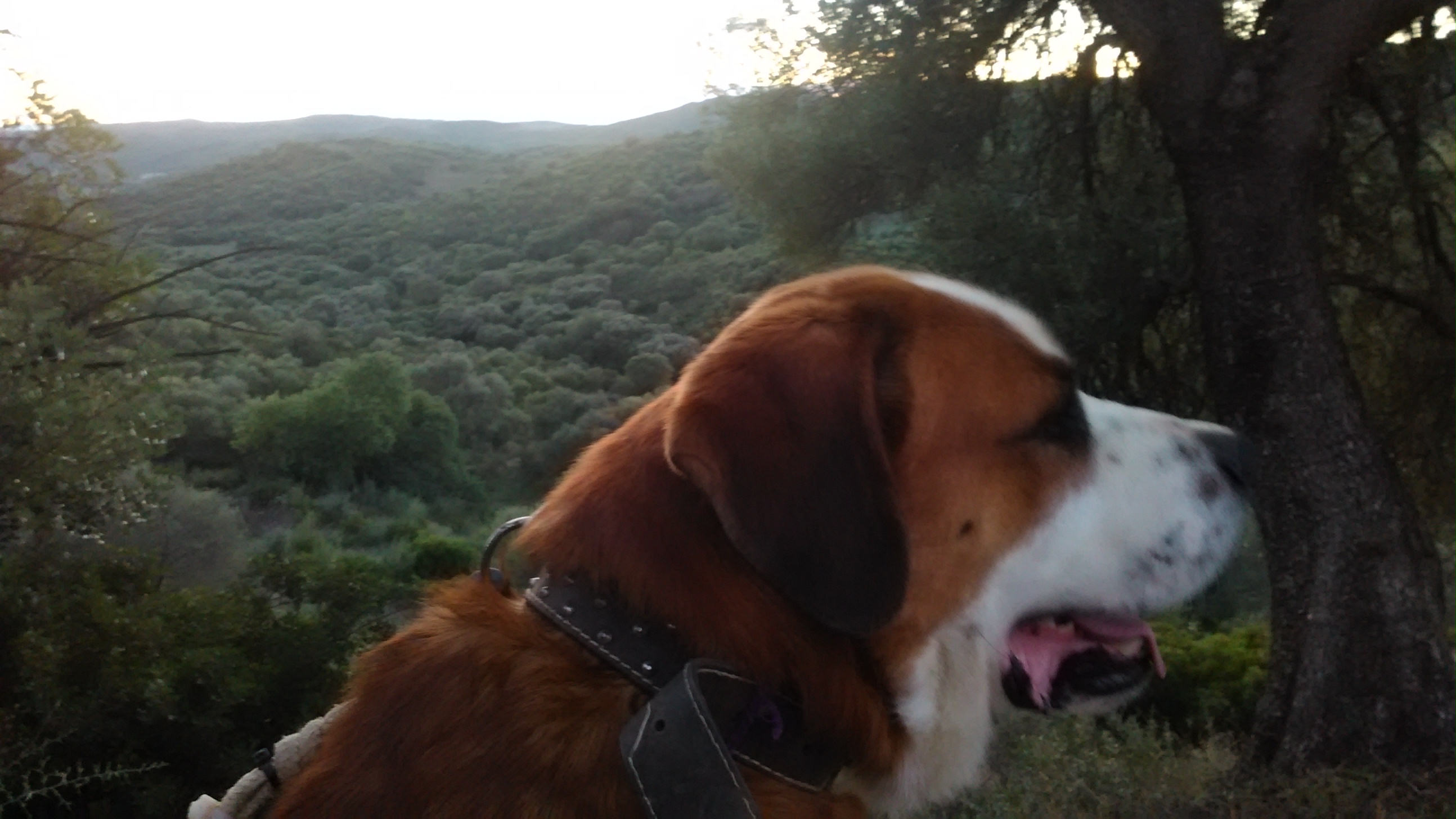 Oso was a burly mountain dog. A big powerful puppy. At first he dragged me around, then I started training. In the day he was tied on a long lead in the front yard. Otherwise, he ran off into the bush and chased the neighbour’s sheep. He had already killed two. 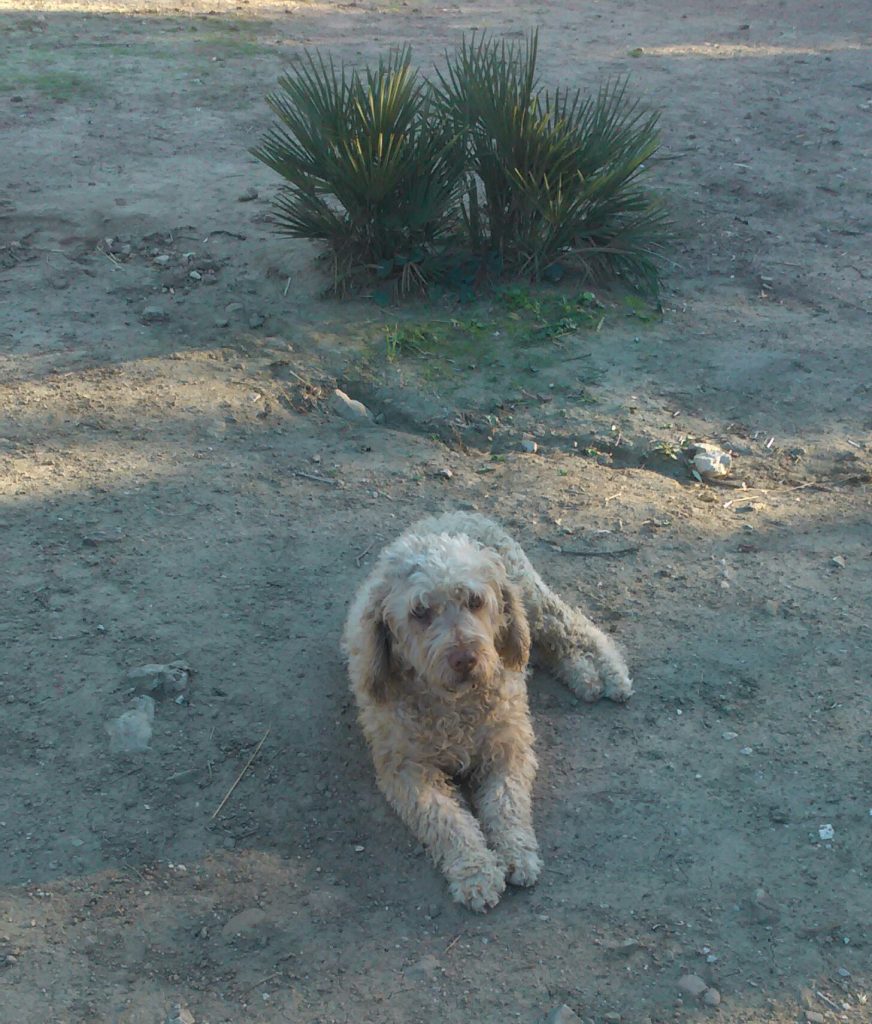 Obi and Oso were mortal enemies. They had to be kept separate or they would try to kill each other. This was how Obi got the wound in his shoulder. Every morning I gave him a meatball with an antibiotic hidden inside. Maybe that was why he bonded with me. For days he stayed in his house. Then one morning he showed up at my door with Mousie. He chased the horses. He seemed to think he had to protect me. 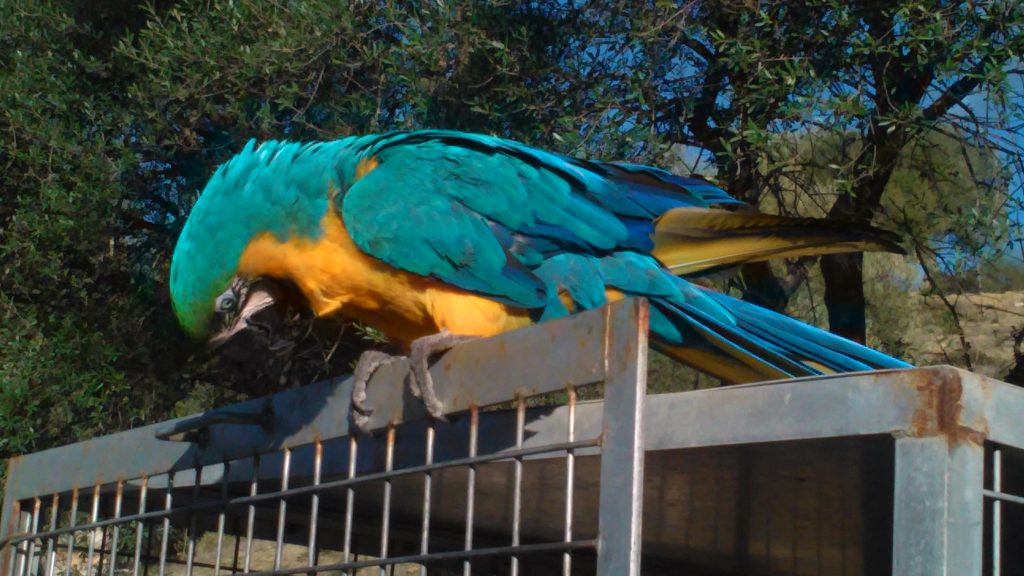 Vaca, the parrot drove me crazy. He would shriek like a banshee, ranting incoherently, and then say, ‘huhn?’ He pried out his tin water dish, tossed the water everywhere and proceeded to bang the dish repeatedly on his cage. Then he called ever so sweetly, “hola?” If I didn’t respond, he would say, “hola, Vaca,” as if he was trying to teach me. When I was in a bad mood, the parrot had to say “hi” to himself. Then he shrieked so loud I thought my eardrums would break. This was followed by a demonic, “heh, heh, heh, heh…” 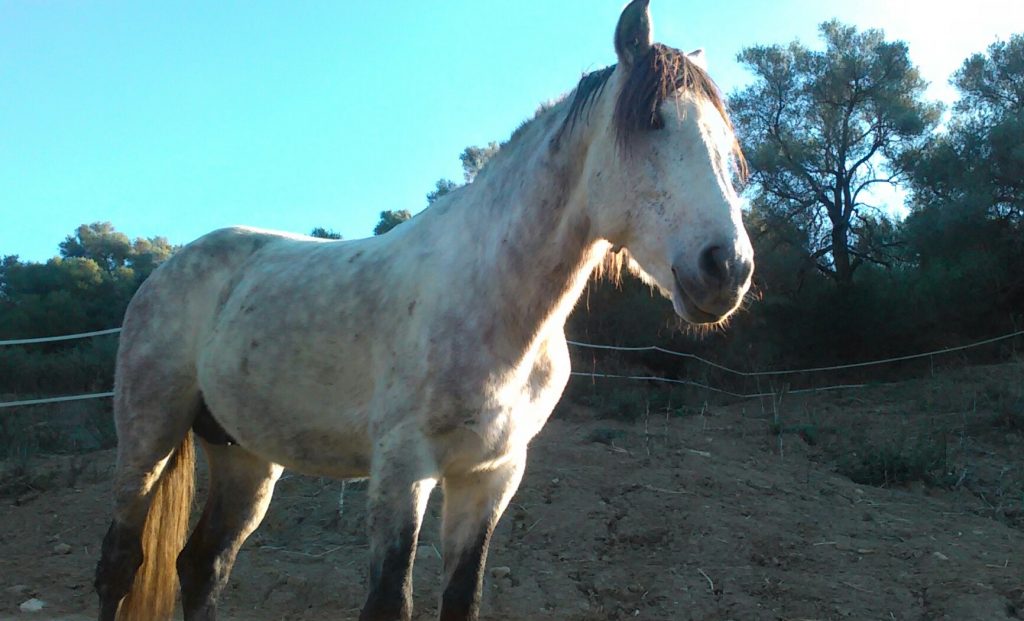 The stallion stood on his hill and surveilled the land. He kept his eye on me and the mares, kept us all in line. He was always the first to be fed among us. 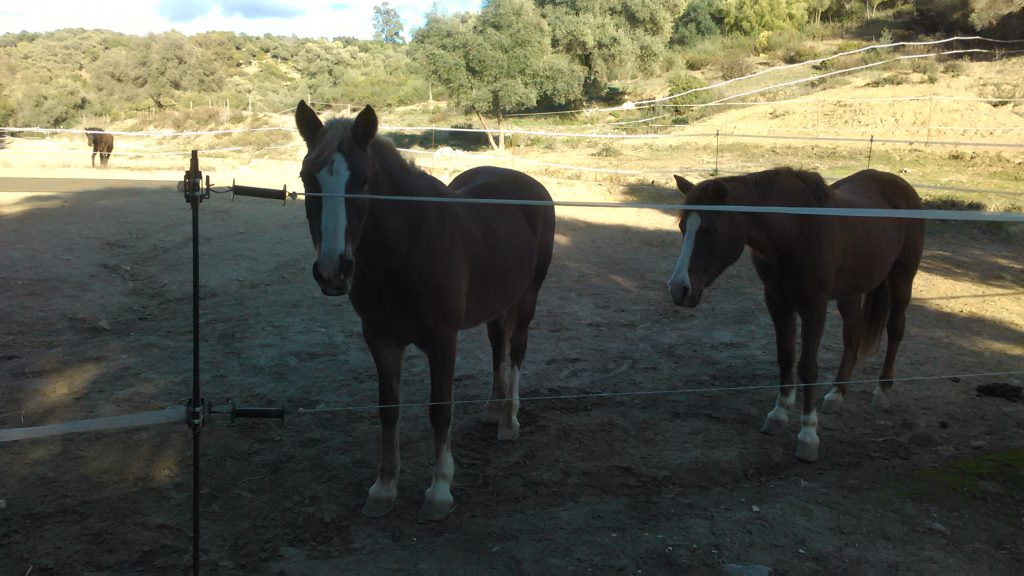 The two mares in the paddock next to my caravan were docile and curious and followed me like dogs. I put my arms around their necks. I brushed the yellow dust from their coats. 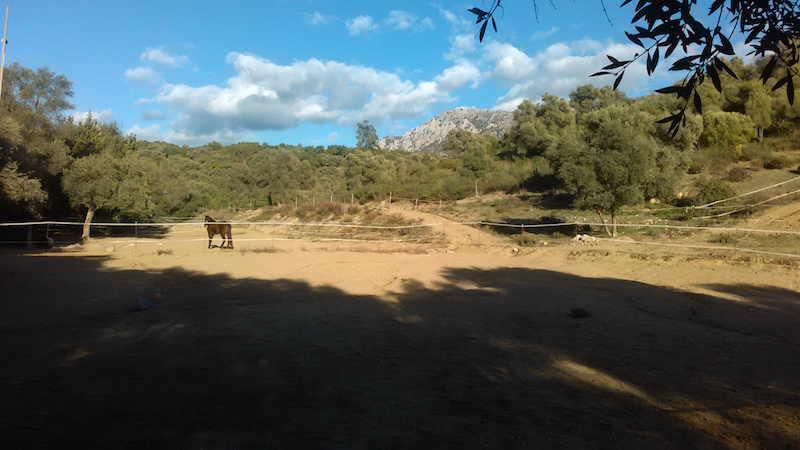 The third mare kept her distance, alone in her own enclosure at the other end. She had broken out in a strange skin rash. Her skin flaked off in patches along her back. I treated her with a homemade salve that smelled of lavender.

The family, mother, father and two young children, had gone home to France for the holidays, so I spent Christmas with the creatures. In the house was a sweet Siamese cat that just wanted to stay in and sleep all day. I put her out in the sun but she found a way to climb in through a window. There was an old sheepdog that slept outside the front door. Every morning he initiated a howling session and all the dogs joined in. He could hardly walk and was always left behind. When we returned from our walks, the dogs would stop to greet him, lowering their heads and licking him on the mouth. There was another dog called Luca, a sprightly golden collie mix. Some lazy afternoons, I slept in the hammock under the olive trees, with Mousie on my belly and Obi under my swinging body, and Luca chasing birds. 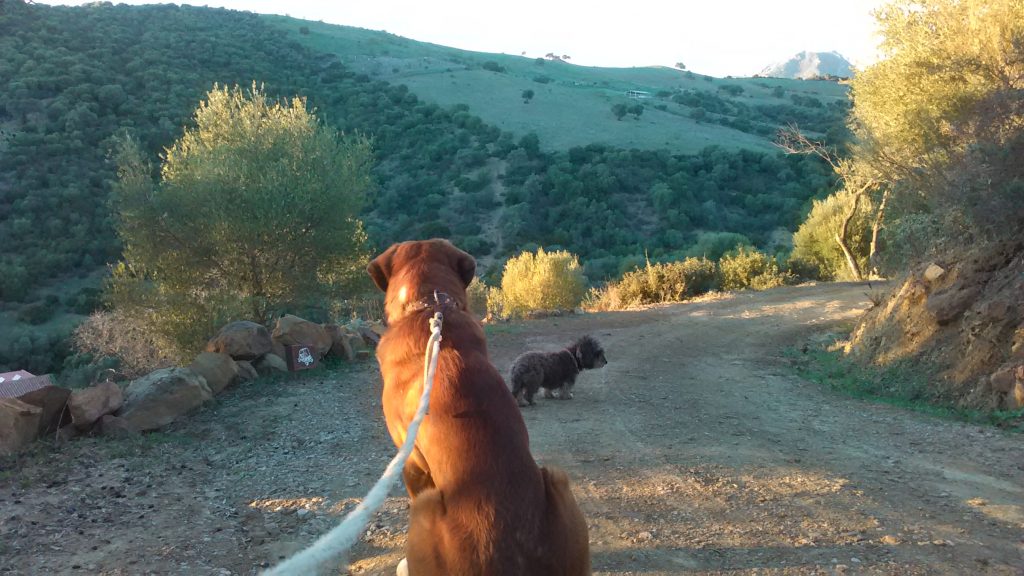 Walking the dogs up the long winding road from the ravines 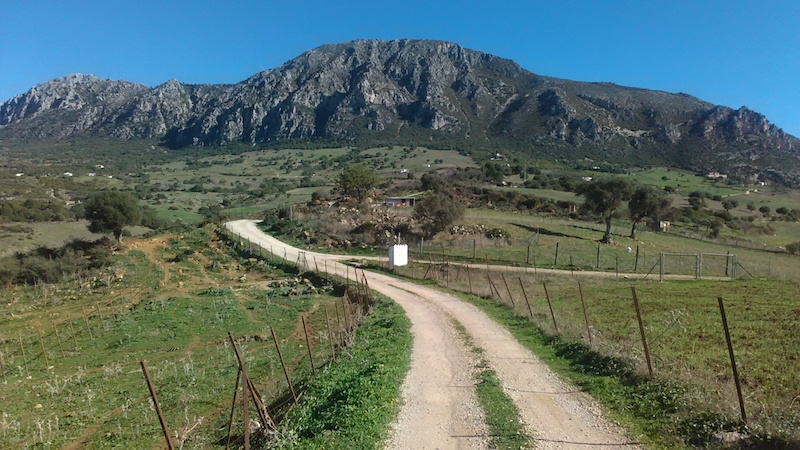 The road on the way to the village 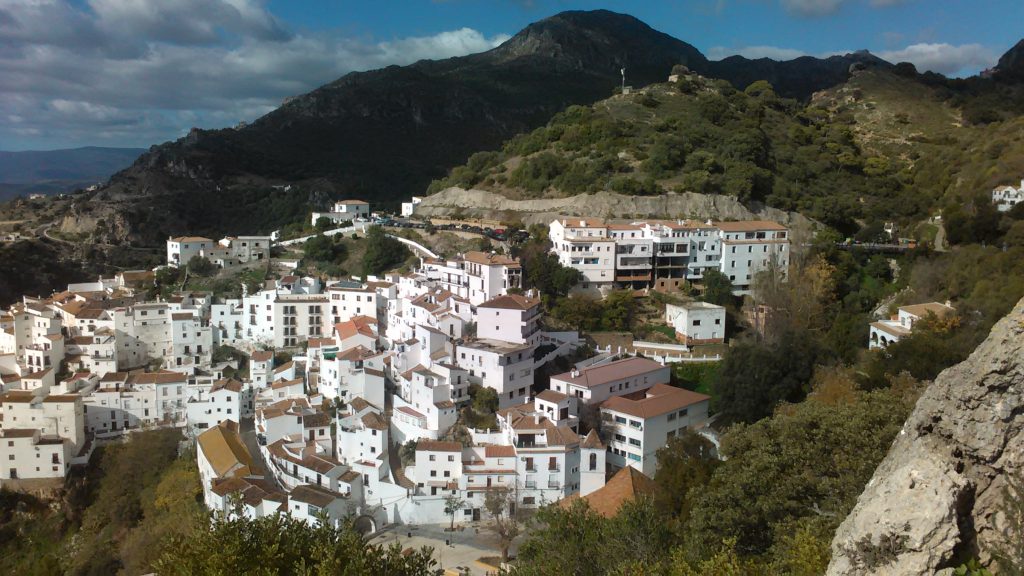 Cassares, a glorious white village on the mountain, a five kilometre walk from the finca. 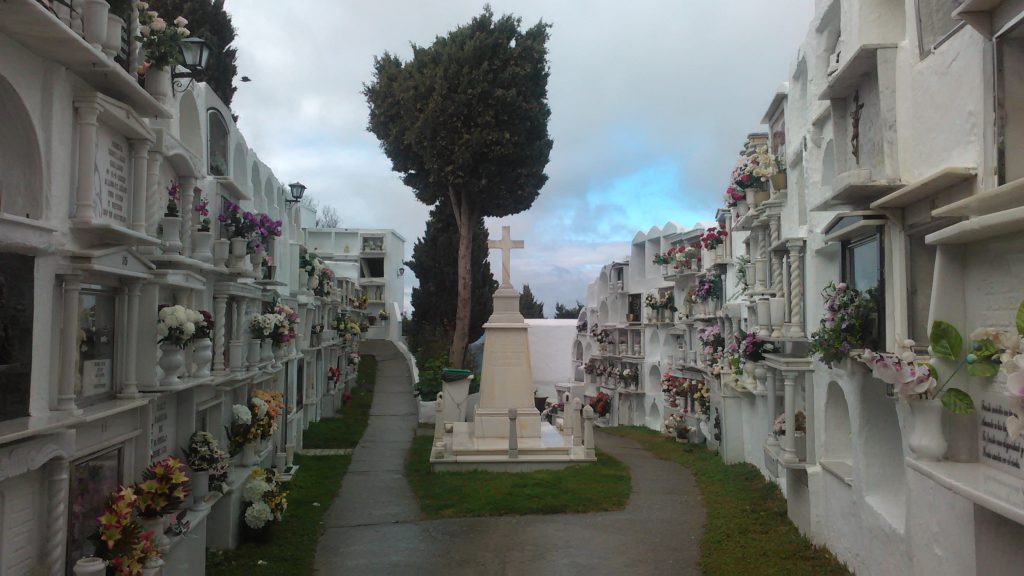 The most beautiful cemetery I have ever seen, on the summit of the mountain village 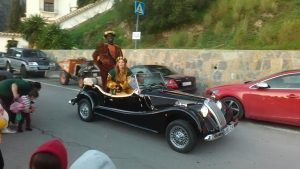 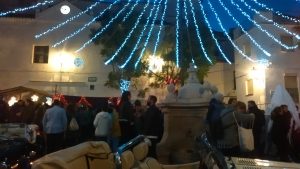 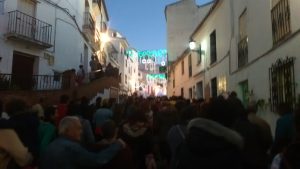 When the family returned they brought me to the celebration of “Los Tres Reas”, the Three Kings, held every year on January 6th. The kings drove up in three vintage Rolls-Royces, throwing candies to crowds of children. Later, the people walked to the centre of the village for food, wine, dancing and singing. I had fully recovered from my illness. I came back to my self. 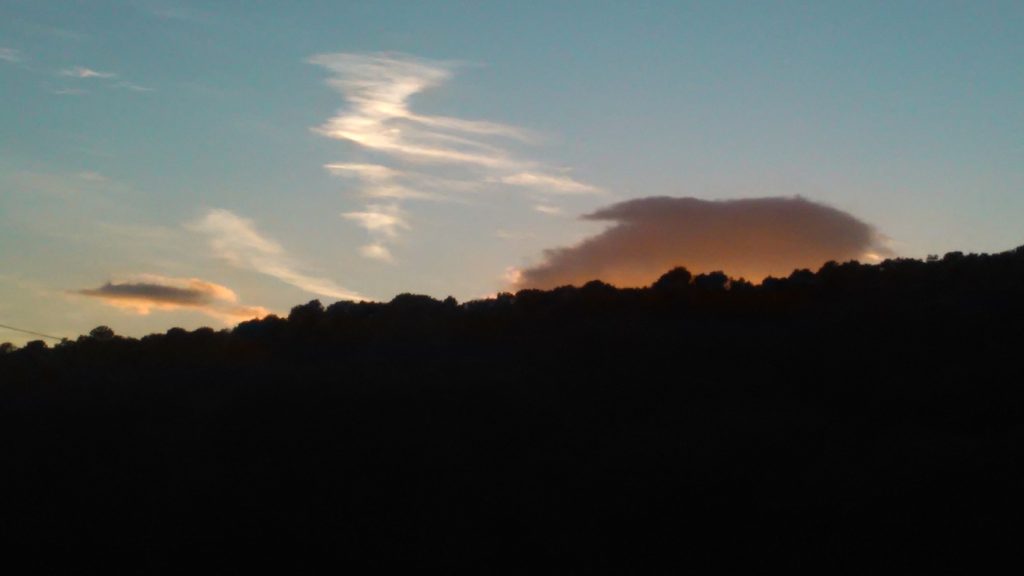