Mariposa is a painting that took seven years to arrive.

My stepmother had a vision about an empty window in her old barn wall. She saw a horse there, looking out. She gave me the measurements and I started work on a piece of canvas. This half-finished painting got packed away and forgotten in my many moves, from the blue cabin to the trailer in the swamp, to Africa and Costa Rica, to the red cabin. Meanwhile, my stepmother and my father travelled back and forth between their two houses, and to Mexico, until, one day, they came home for good. My father sold his house and moved across the province to her house. The painting was completely erased from memory.

I remembered the horse only recently when I went to visit them. I saw the empty window in the red barn wall. 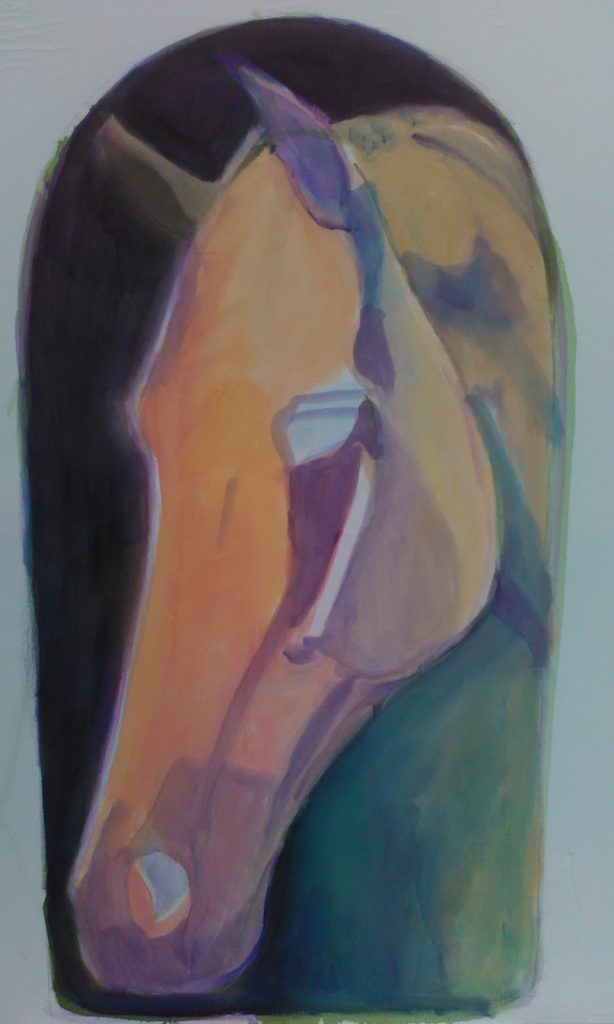 Mariposa means ‘butterfly’ in Spanish. My father had been to the Monarch Butterfly Biosphere Reserve in Michoacán, Mexico. It was a World Heritage Site, protecting a small territory where the butterflies came to overwinter. How long had they been coming, hundreds, or thousands of years? Or since the beginning of time?

On arrival they covered the land in a carpet of orange. They landed on people’s arms and hair, at people’s feet. Every pine tree was alive, fluttering with a million wings. The butterflies travelled every year from Eastern Canada. It was a migration that took four generations. How did they find their way? And what would happen if the butterflies lost their home?

My father and stepmother had been travelling for years to Mexico before they found each other in the mountain town of San Miguel de Allende.

My stepmother was inspired by the image of the butterfly. She found them everywhere. They brought me gifts: butterfly earrings of Mexican silver, inlaid with yellow and orange, and a journal book with a silver butterfly inlaid on the cover.

Butterflies are found among the Aztecs, Olmecs, Mayans and other ancient Meso American cultures, in stones mosaics, in textiles and paintings, in masks worn to honour the goddess, Xochiquetzal, ‘Flower Quetzal’ who presided over the arts, flowers and fertility, and in the stone altars of the goddess Itzpapalotl, ‘Obsidian Butterfly’ whose domains were fire and war, human sacrifice and the souls of warriors.

My father designed and built his own house. It was inspired by the Bauhaus movement of 1930’s Germany, where art met architecture, form met function, tradition met modernism, with clean, efficient lines, and honest materials,  and by Frank Llyod Wright, whose structures flowed with nature, and by his travels to Japan, where houses were temples and torii gates were portals. It was flat-roofed and rectangular, open-concept, with levels, built-in counters and beds, floating stairs, many long windows and light wells, and minimally furnished, with Japanese prayer scrolls, paper lamps, Islamic arabesques, Mexican nativity boxes, and Chinese dragons. He built the house with his own hands and with his vision. He knew every line and every nail.

Her house was an old timber frame barn that she transformed in her younger years. She bought it for a song, but the work was daunting. All of its natural beauty was covered over. She unveiled the cracked beams and the pegs, and the wood around her fireplace stained with ox blood and blueberry. There is horse hair in the walls. Whenever  I visit, I stay in the room above the open shed where once the horses were kept. It still smells of mangers. It was there that the horse’s name came to me.

In her house are many objects from Mexico, silver plates and candle holders, a brightly painted wooden cross, luminous tapestries. Her own paintings grace the walls: landscapes of hay fields and country roads, and still-lifes of tables set with Mexican folk pottery, mangos and papayas, flowers and Aztec masks.

For years they travelled between their homes. One week, my father drove the four hours to her place. The next week, she travelled to him. There was some unspoken understanding that they would not alter each other’s houses with too many of their belongings. There was a purity kept in the two unique houses. Their overwintering site in the apartment in Mexico was neutral ground, where they shared the space equally. They have followed each other for so long, and taken care of each other. A blue painted tile by her front door reads: ‘Mi casa es su casa.’ My house is your house. When my father sold his house, he seemed lost. The momentum slowed. He brought the last of his belongings and kept them in a room upstairs. It was like his migration route had been altered. 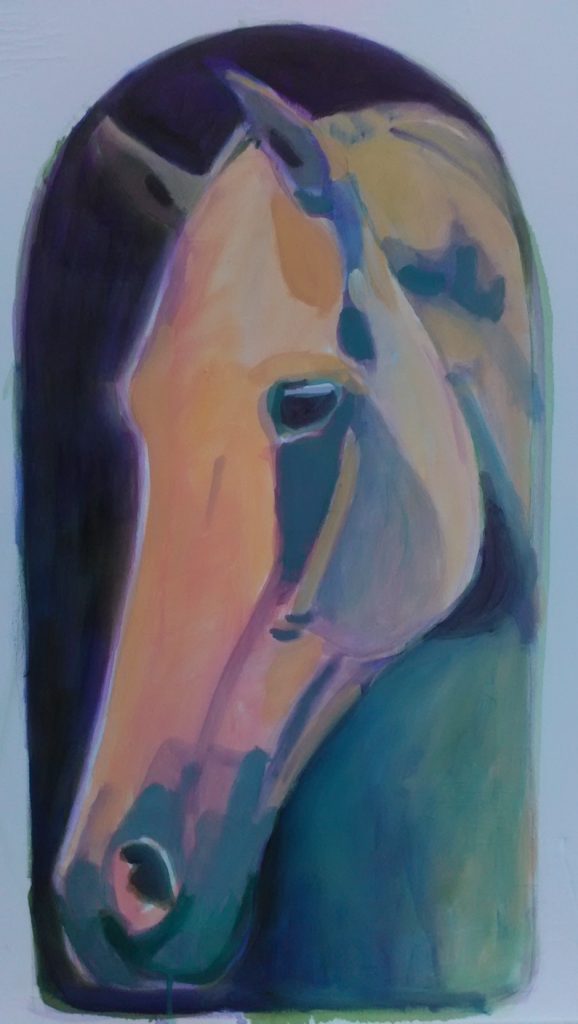 I used her paints and brushes and an old canvas she found in her studio. I drew a line of the shape of the window. I sat in the garden, listening to the birds, and dipped my brush in water. I have not painted for four years. But it came back, the sound of the bristles on the canvas, the way the paint went on wet and lightened as it dried, the way a dark layer underneath shone through a new layer. The painting unfolds in stages. First there are the loose lines that define the shape. It appears magically out of nothing, but it’s as if it’s been there all along. In the beginning there is no fear because I am not attached to any outcome. I am just following, filling the outline with washes of colour. The colours just come to me, the warmth of pinks and oranges. What you lay down will come through the following layers. You lay traces. The more you commit, the more is at stake. I begin to hesitate. Soon the shapes of darkness and light begin to mould the form and bring it out of the two dimensional surface. It begins to climb out of the canvas. This is the hardest stage, when you have created life and don’t know how to proceed. When is it finished? When do you let it go?

I was working through the feelings of my father aging. How familiar is the image and qualities of a person you’ve known your whole life. You want the form to stay the same. The way he stood in his kitchen cooking, while I sat on the other side of the counter, watching and laughing at his jokes. The stovetop was built into the counter and the open space between the kitchen and dining room allowed us to speak across the simmering food. The light from the forest came in from all the windows and touched the oak beams, lit up the white walls and smooth planar surfaces, travelled freely through the wooden slats and floating stairs. Walking out of the house with my father into the forest was a continuation of the architecture, walking into the lines of golden summer days and fiery falls, following the seasons. I was born into it.

Butterfly eggs are laid on the kind of leaf the newborn caterpillars will eat. As they eat they grow quickly, shedding their skin to suit their size. When they have reached their potential they form their home, the chrysalis. Inside this beautiful jade green capsule they transform their bodies. Then they open their eyes and break through the skin, unfold their wings and fly.

I was one year old when my father’s house was finished. I spent my formative years there, and later I took care of his house every winter while he was away. My father lived there his whole life until he sold it four years ago. I still dream of it. I can sense the light through the windows and the sound of the forest. I can smell the wood and the earth. So many memories within the walls. How hard it is to leave. Is this how the butterfly feels in leaving its cocoon? And what is a butterfly but all the stages of its transformation. The butterfly is only one part of the journey, and not final, as the cycle begins again.

My life has been blessed with horses. I was seven when my father bought a Quarter Horse called, ‘Chester’. He kept it at a stable down the road with six other horses. He and my mother rode with their friends through the lush forests. Sometimes my brother and I would ride behind them with our arms around their waists. Or the neighbours would ride up to our house for their ‘stirrup cup’, a shot of whiskey with maple syrup that my father held up on a tray.

Later, I rode on my own chestnut Quarter Horse, ‘Brandy’. We navigated the endless paths through the hills. There were times when I didn’t know where I would end up. Horses have a natural compass within them. They find their way home. My father was there through my dark year of depression. Every day after work, he walked through the forest to the stable to feed and water my horse and make sure he was safe. When I went away to college, he built an enclosure and brought my horse to live at his house.

The horse is the unifying force. It is a mythic creature, often depicted with wings. It is earthbound, but it can fly with the wind. Having wings makes all the difference. It climbs through speed. When a horse runs fast enough it feels like you are flying. And the faster the sensation of speed, the slower the moment. Time stills and yet it has no bounds. 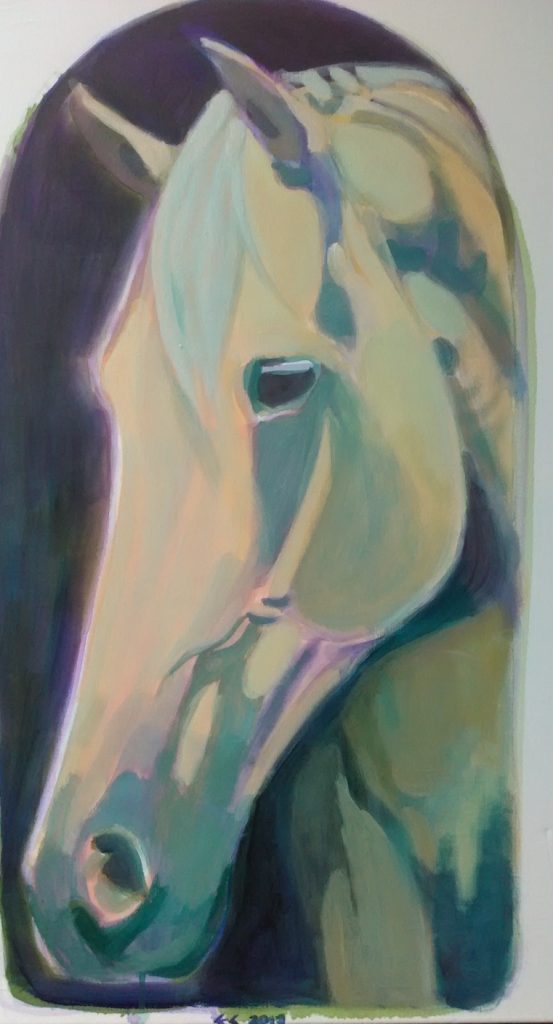 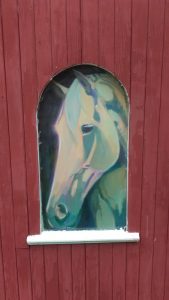 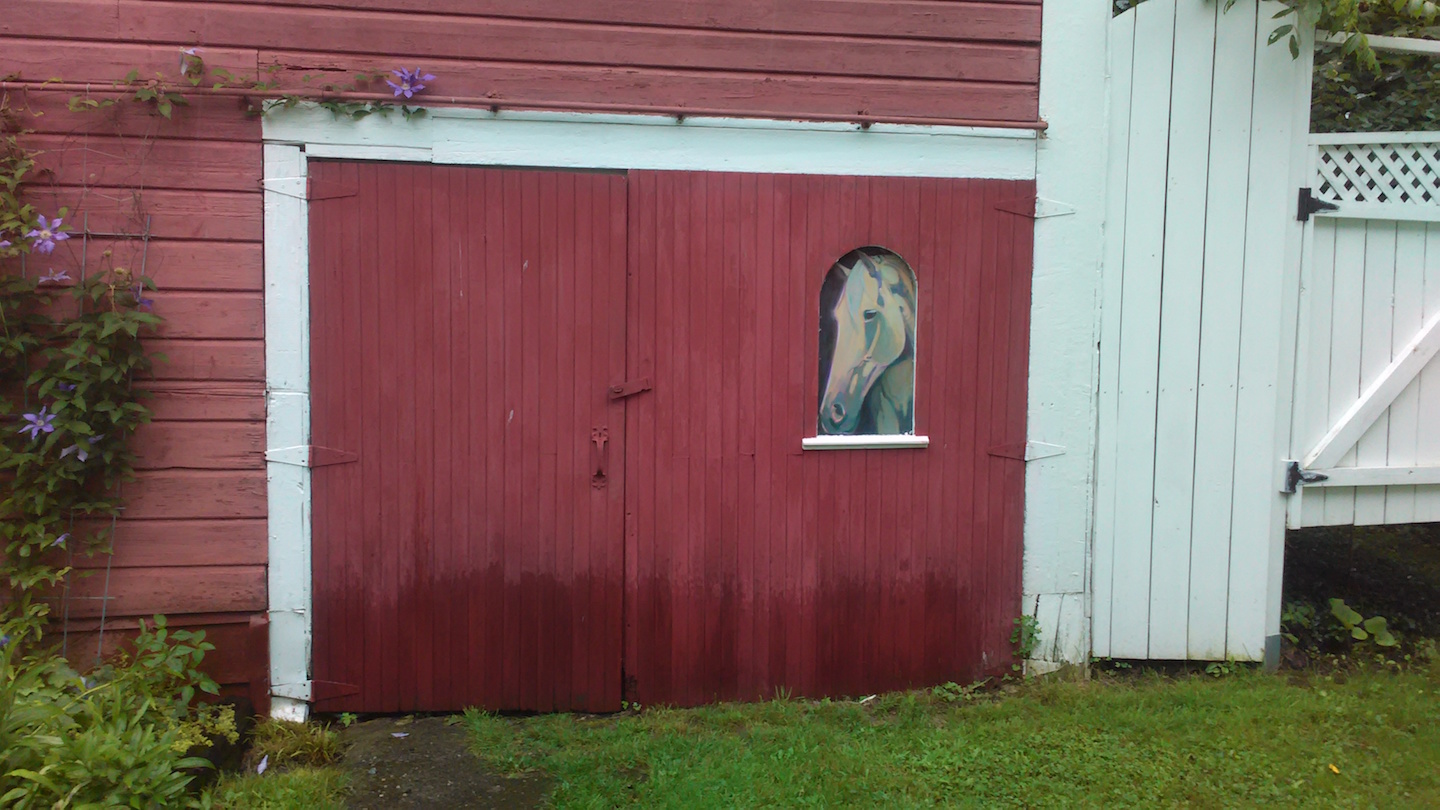 The fledgling that couldn’t fly

The struggles of an ant