“It is not the physical breaking point that concerns the pilgrim, but the emotional, spiritual one.”

(A young girl walking from Belgium) 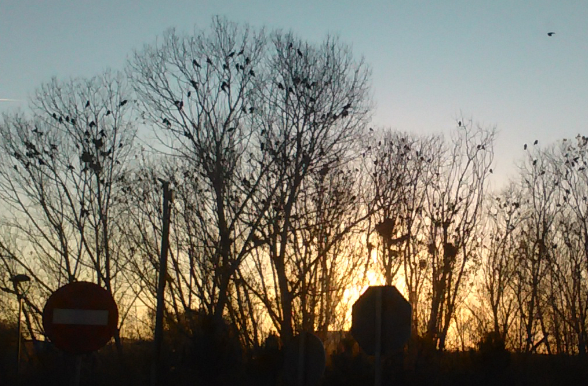 The crows were flying in to roost as I walked into town, wave after wave of black wings in the sky. Two turned back, circling, guiding the others in. They were like pilgrims, taking care of each other. At dawn I found hundreds of crows in the trees by the highway, cawing, greeting the rising sun. As I set off through the corn fields they flew over my head one by one. On the way to Astorga…as the crow flies.

I lost the Camino a second time and ended up at the entrance of Rabanal village. I was five kilometres off track, in a suffocating place of spiny clumps of bushes and orange earth. I walked without knowing where I would end up. Then I found the blessed yellow arrow marker again and came into the open.

There was a man walking slowly towards me. Something scared me and I sped up, passing him. My heart was pounding, my legs strained under the effort. The highway pointed to a wall of storm clouds. I soon entered a cold blasting wind and hail. I was battered, flooded by a profound fear that seemed to rise up out of the earth itself. I went for hours on pure adrenalin. Not one pilgrim in sight. 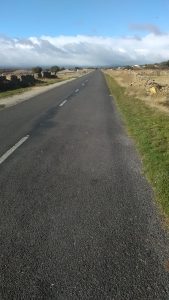 A pilgrim girl had been kidnapped and murdered on this stretch a few years earlier. I learned this much later. The man had been convicted. I had come to the door of his village.  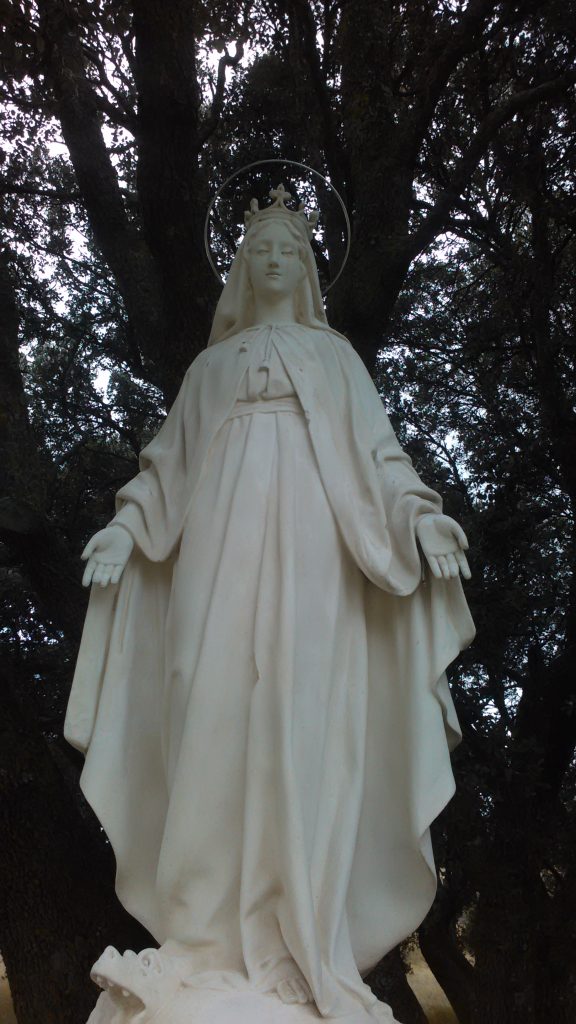 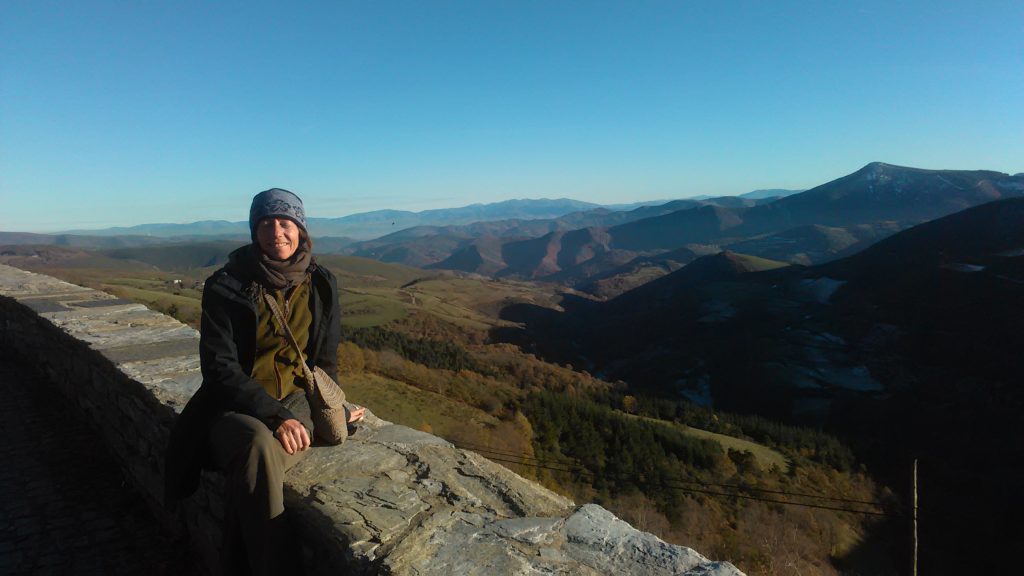 I always felt safe on mountains. Bird’s eye view of the land below, snow, sound of bells, cows and horses, Celtic music, stone walls, a man hanging sausages in a shed, old women in aprons, chatting at the crossroad, rain running off the black slate roofs.

I stopped under a shelter to put on more layers and line my pack with a garbage bag. I emptied torrents of water from my boots and wrung out my socks and put them back on again. It didn’t matter. I was soaked through, shaking with cold. It took everything I had to keep walking. Rain ran down my face, down my back, my boots sloshed with every step. This was the moment. I could feel it in me, questioning my sanity, the whole thing, a month of walking. Now that I was so close to the end, it was testing me. The rain was a cleansing ritual, while it broke me down bit by bit. I kept walking. 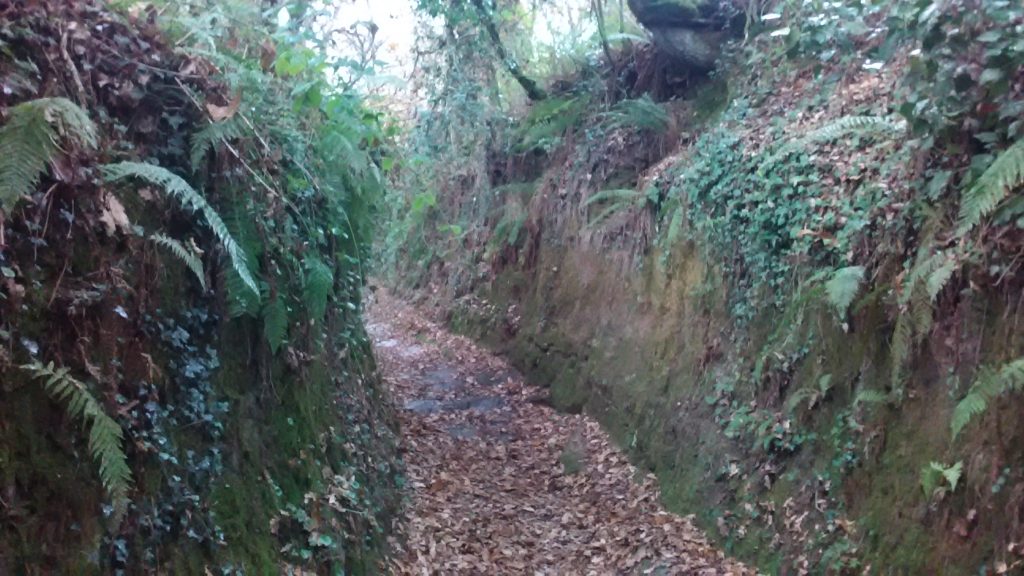 That night the dormitory was full, buzzing with excitement. This was the place where all the tributaries met in one great river flowing to Santiago. 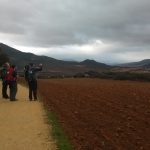 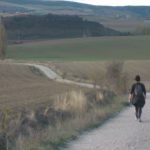 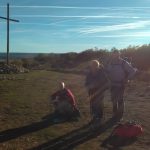 Each pilgrim had come with a story and a reason to walk. I met all kinds: a 65 year-old man walking from France, wandering minstrels, a limping Korean girl who had made a promise to carry her heavy pack to the end, a Belgian man who had been alone his whole life and was looking for his family, a Spanish man who had lost his wife. The Camino held us in a timeless state of grace.

I felt strangely invisible. I suddenly realized I had absolutely no idea who I was. I had lived my life with a barrier between me and the world, a sheet of glass where I could see so clearly but not touch.

This had been conditioned into me from childhood. My true self  had gone under and was not seen again, until now, forty years later, shimmering under cracked glass.

The eye of a blackbird in a thistle hedge. My body felt like lead. The eucalyptus forests made their own special wind. Airplanes thundered over our heads. A thousand years of pilgrims and those of the future were walking with us. I was accompanied by the lively group of Koreans.  A young doctor and I were talking about following our own paths, not the ones dictated by others, individualism versus the collective.

It seemed no one wanted to arrive. We moved deliberately and slowly, stopping at every cafe we found. We saw the massive cathedral for hours, held back in time. The House of God. All that we had seen and felt was unravelling within us. What would happen in the end? 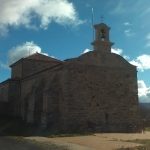 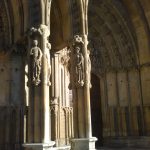 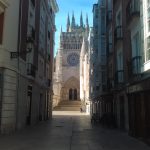 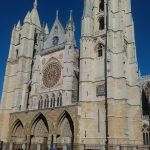 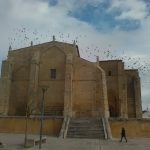 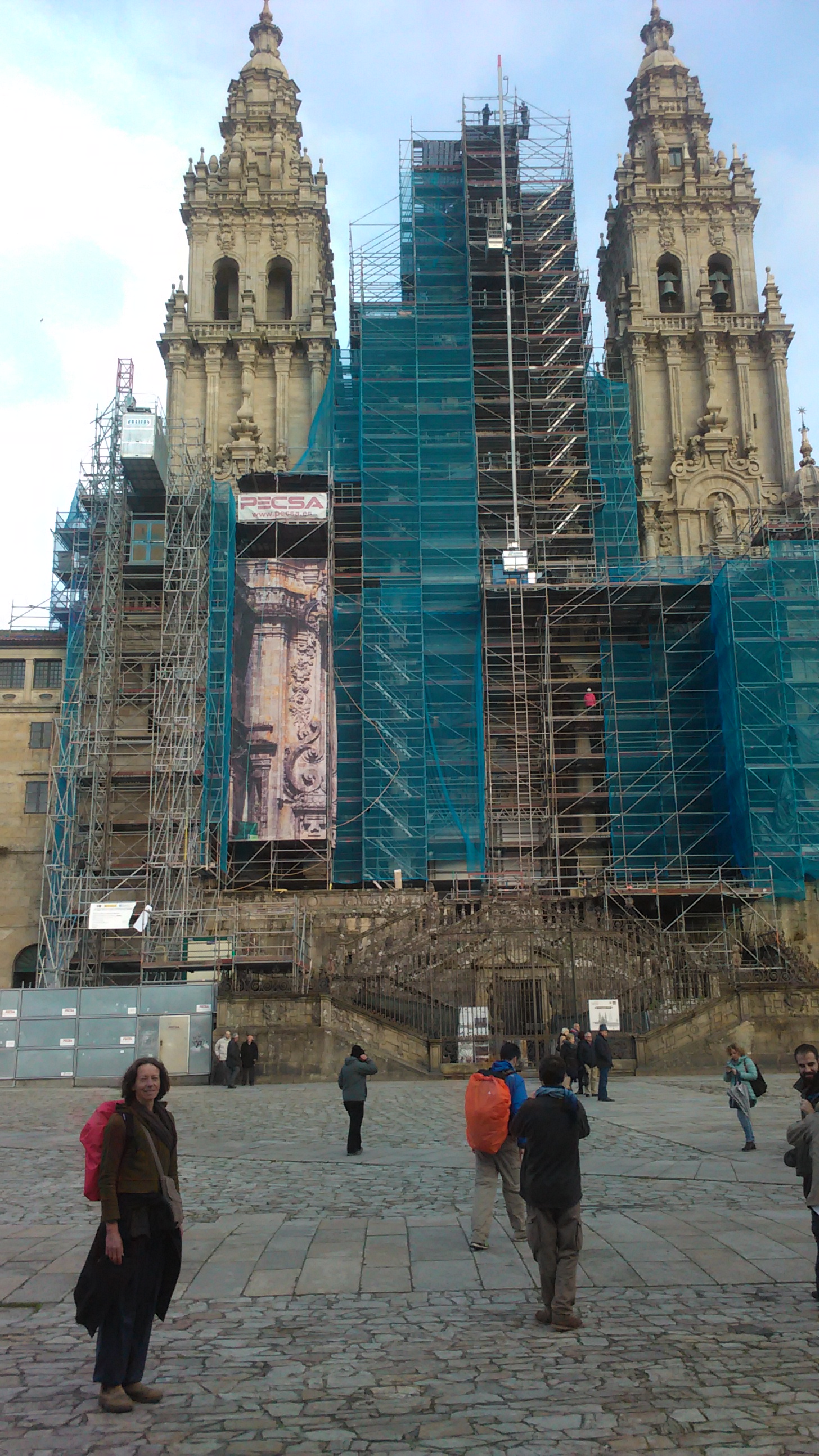 I walked in alone, and stood there so small. The beautiful cathedral was under scaffolding. It felt anti-climatic. I heard people calling my name and turned to see everyone there, lying on the stone across the square, all the multicoloured clothing and nations. We embraced, cried, laughed. There was the Brit. I never thought I would see him again. At Villafranca del Bierzo, he had taken the difficult mountain route and I had taken the cold dark highway between mountains. He had gotten lost and I had been in a place of thistle and ice, where the sun did not come. For weeks we had paced each other, ever since the deer and the boar had crossed our paths. We embraced.

Golden angels held the roof of the world and so much glittering gold. At the Pilgrims’ mass, we were held a last time in a state of grace. I put my hands on the shoulders of Santiago. His body was silver. He was covered in magical symbols. ‘Old man and the sea’.

A million pathways wove through me like rivers. It was like I had been floating forever in the ocean and suddenly I stopped and the waves and currents overtook me. I was drowning in movement.

Bus to the sea, Muxia and Finisterre

The sea was my true destination. I threw my special stones and prayers into the blue. I spoke to my father. 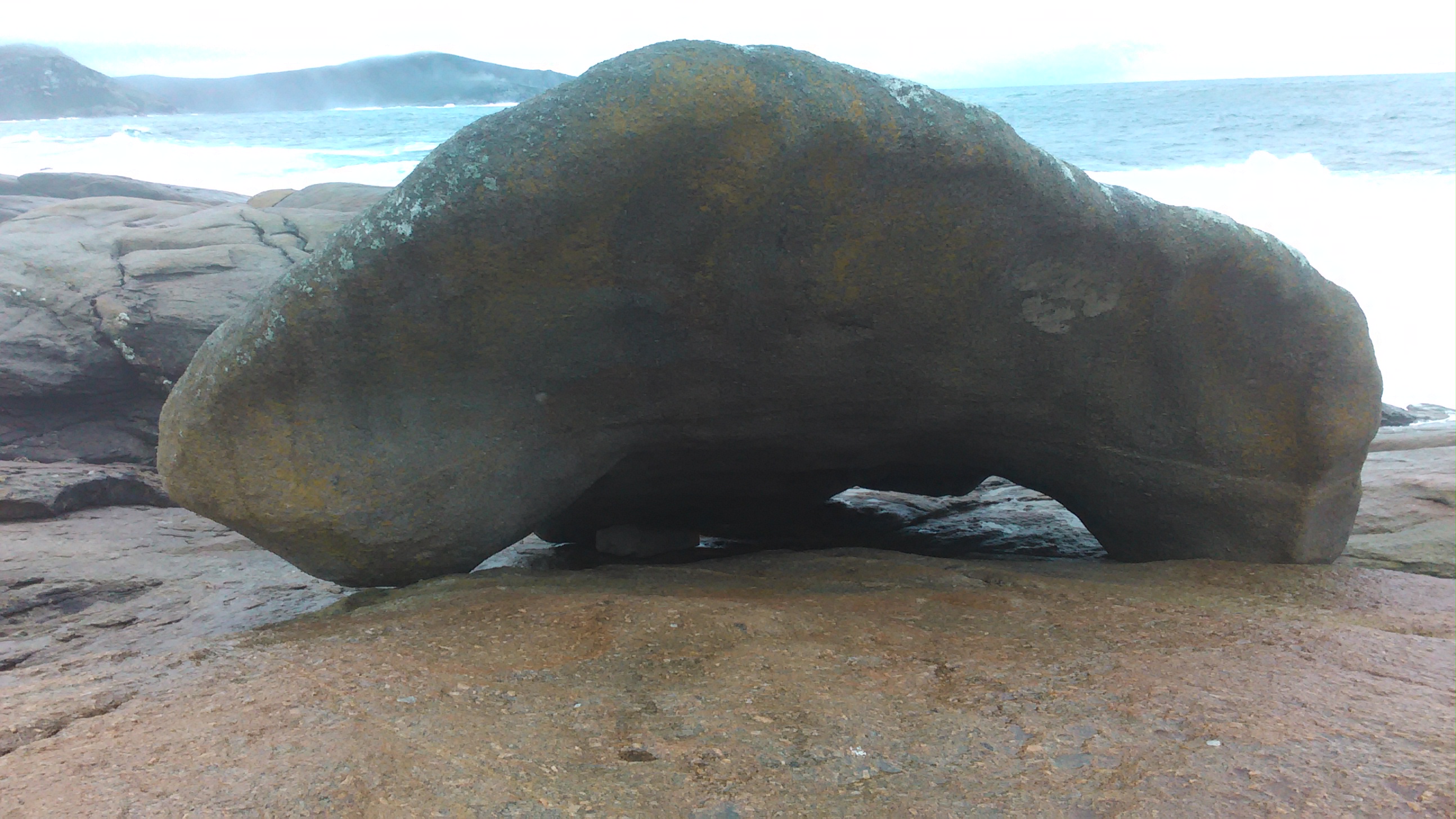 This was the ‘Costa de la Muerte’, the Coast of Death. There was a Pre-Christian Celtic shrine to ‘La Virxe de Barca’, the Virgin of the Boat. The great stones left behind were the pieces of her boat, oscillating stones that moved with the wind. A local man showed me the ‘os cadris’, the kidney stone. I saw it as a sacrum. He crawled under the right hip and I followed, with my hands on the damp yellow rock, pulling myself up towards the opening and the light.  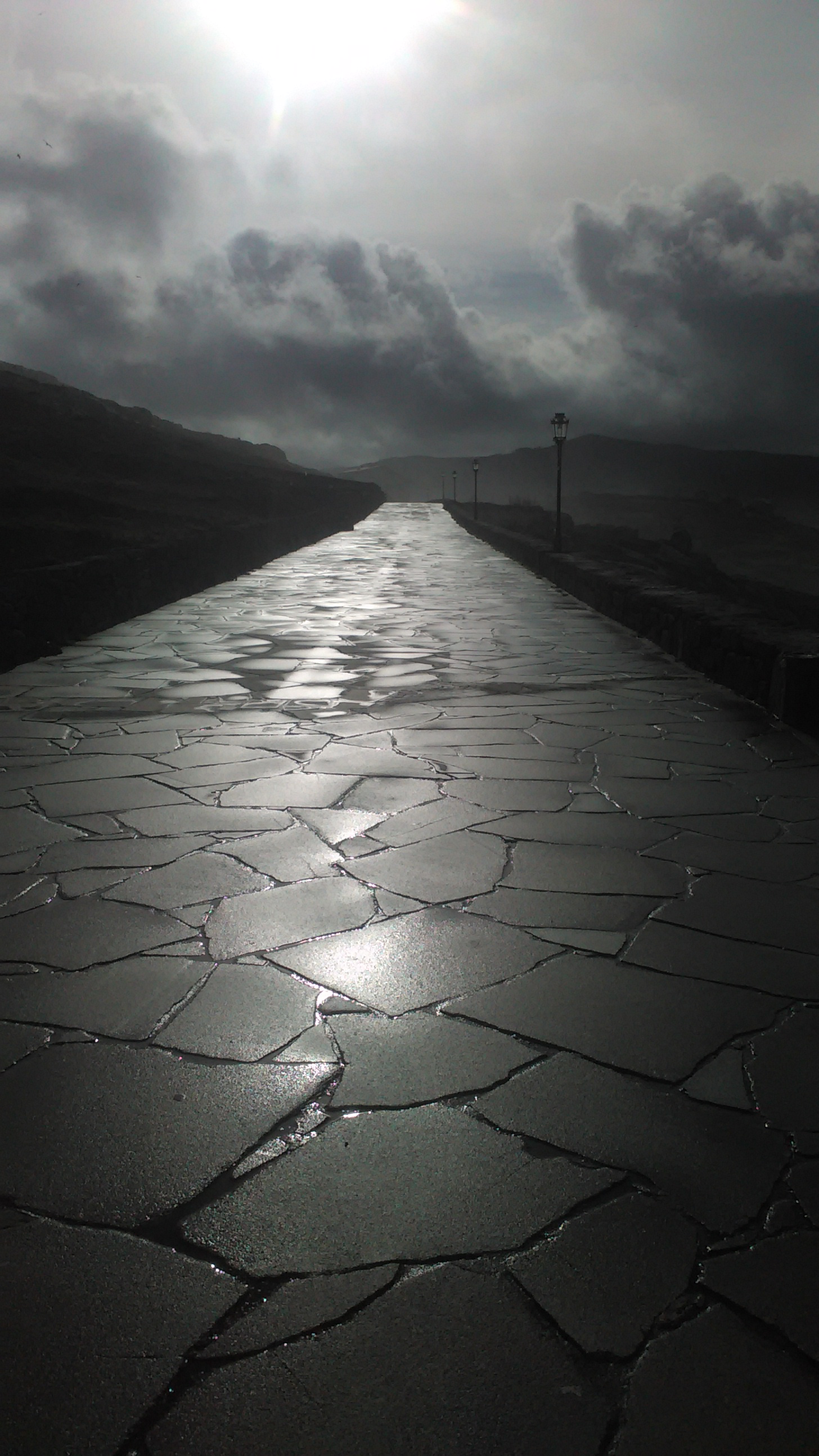 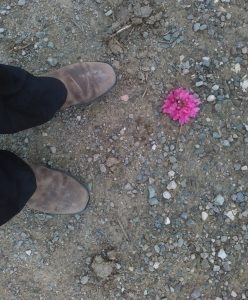