Winter is over. It’s a miracle. My door is open to the mist on the distant hills, to a valley uncovered, turning gold to green. The birds return. Their voices ring like echoes in a bare room, because for so long there has been silence. Suddenly, there is movement. I think of the vultures, and then they appear. I wonder where the loons are, and then they arrive on the lake and I hear the first haunting call. Every day a new bird arrives, the robin, the thrush, the starlings and goldfinches. The speckled trout leaves are up. Eight cords of wood are down to one. Rain barrels are overflowing. No more gathering snow and waiting for it to melt on the stove. No more clearing of pathways. I came through. I pull back the mattresses and plywood boards that closed off the upper floor for six months. I pull up the plaid wool blankets and blue sleeping bags from the floors. I take down my blanket contraption, three blankets tied with rope to a thick branch and hung on a nail.  It  enabled me to open and close the door freely and keep out the wind. 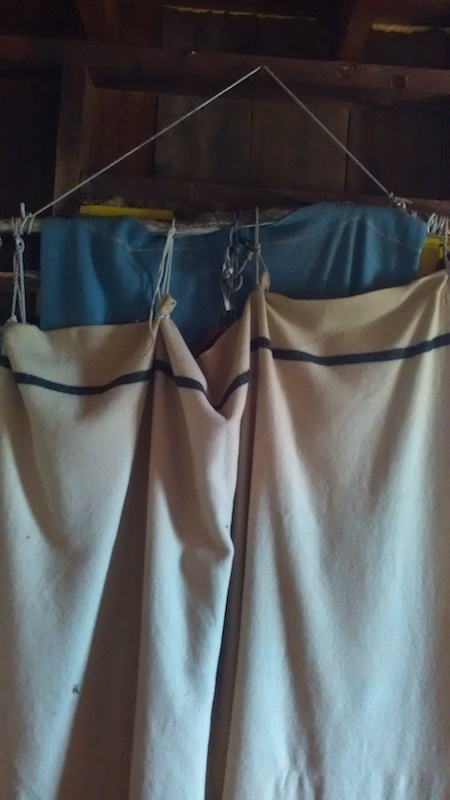 When the electricity went out in the community, I wouldn’t even know until I got to work. People said it was difficult, but for me they said, ‘well, you already have a system in place.’ The sheep wool stuffed into the cracks between the wall planks remained as a testament to my first winter. Why did  I put myself through this? I wanted to live on my own terms as much as possible. It was a system like any other humans could come up with. It had its faults and sacrifices. I relied on my car battery to charge my phone, but if it was too cold the phone froze. I had a headlamp, but I could also sense things well in darkness. I was amused by visiting friends who got disoriented and frustrated by the dim light of candles, by my lack of running water… My fridge system depended on the weather. If it was very cold, I kept my food on the counter or near the window. Sometimes the milk froze inside. In medium cold, I put food on the floor. In cool weather, I kept it in animal-proof containers outside. I had a propane tank for my cooking stove, but if it ran out I could cook on the coals of my fire. This did not work in warm weather, or when it rained and soaked my outside fire pit. I burned eight cords of wood each winter, but I did not have to cut it. It was delivered to my door. And I did not have to hunt for my food. There were luxuries and limitations, and also innovation.

In November I was looking out the windows, watching the world contract and go quiet, waiting for the cold to come in. The cabin became an extension of my body, slowly going numb, the line along the walls, the floors, the glass of the windows. The space got smaller and smaller. The desk to the east windows was abandoned. Blankets stuck to the window panes. The dishes froze in the basin in the sink. I could pick up the end of a spoon and the whole round mould of ice would come out with it. First make the fire, then thaw the water jugs.  I never knew olive oil could freeze. The cold was wafting up from the floors and through the walls,  creeping into my clothes, crawling down my neck. Even though the fire was roaring in the stove, the cold was creeping in like a predator. I was wearing two pairs of wool socks inside the felt liners of my Sorel boots, and long johns, winter army pants, five layers of sweaters, scarfs. I was wrapped in a blanket  in the chair by the wood stove, reading, ‘The Sheltering Desert‘ by Henno Martin. Written in 1958, the book is a true story of two young geologists who escaped the war in Germany to live in the Namib Desert for two years. They survived solely by hunting and gathering. I was struck by Martin’s theory about evolution and pain.

He said the power of certain animals was based on their use of inanimate matter: claws, horns, fangs or scales, or in the case of humans, machines, guns, bombs, technology… Matter could not feel or form judgements. There was a limit to how far it could develop, and the animal’s dependence on this defence led to miscalculations because there was a distance between the observer and what was sensed.

The book affected me deeply. It made me feel how far my conditioning went. There was a false sense of security. Pain was the line. I thought of this while the cold gnawed at the edges. This was my experiment: to see how I reacted, how I changed. There was a bitter sweetness to it. It made me feel invincible and vulnerable at the same time. It made me both strong and soft. It changed the way I thought. I was living on the edge of a timeless world, while still connected to the modern world. It was more psychological than physical. I was obviously very sheltered, and yet I knew nature was the ultimate force. Henno Martin wrote about their constant state of hunger. They were always planning their hunts. They had to stay one step ahead to conserve their energy and stay alive.

Snow storms obliterated the road up the mountain. It was plowed by my neighbour, but tractors broke down, or the banks became too high and there was nowhere to put the snow. Freezing rain encased us in a sheet of ice.

My old Honda stayed at the bottom. I carried up groceries in my backpack. My phone battery died and I lost sense of time. Sometimes I walked to work, and coming home through the valley, I thought of the cold and how easily it could consume me. I passed under the Hydro towers. Huge metal structures, they came down through the land from the north, like Sci-fi Inukshuks . The soft snow falling on the lines made a crackling sound. The system was alive, bristling.  Electricity could so easily falter, a candle flame snuffed in the wind. The night was beautiful, the stars were jewels in the blackness, the fields, the creek, the fence lines were sleeping under snow drifts. Everything was so still and peaceful, deadly. There was a fine line. When I came home I had to start all over again, lighting the fire, putting my water jugs by the stove to thaw, sitting in front of the fire with my coat on, waiting for warmth, holding my jar of olive oil to the flames. Without the fire I was done. I thought: what would happen if I ran out of matches? Lighters don’t work well in cold. I could try to make a bow and spindle fire, but I was not yet very good at it, and my tools were old. I knew that a sequence of unfavourable events could easily lead to the line. What if I was sick or hurt? I had neighbours near by, but it was midnight. Everyone was sleeping, and after a storm the roads would not yet be plowed, and  anyway, my car was at the bottom of the mountain, and the village was ten kilometres away. What if my car didn’t start? How long did it take to freeze? This was the fear speaking. This is what came from underneath all the layers. Take off the hide and the skin, remove the flesh, blood and guts, and there were bones. And bones broken and pulverized, wore down to dust. So there was nothing there. Why was it so frightening? Why worry about it, and how close we all were to the edge? I crawled into my double down army sleeping bags, savouring the warmth and protection, and lulled by the hiss and hum of the flames, I fell into a deep sleep. When I opened my eyes again in the morning. I could see my breath and the windows were scintillating with frost.