I got hit on the nose by my painting.

The neighbour’s cat got in and I was trying to get her off the shelf, but she was putting up a fight. The painting was not fixed to the wall, and the image of the bird with its wings outstretched loomed over me, then swooped down and struck me in the face.

The worst place imaginable is when you can not make a decision. You go in circles. Every possibility negates another. You can’t leave your job because you need money. You can’t stay at your job because it is eroding your sense of self and has no meaning and it is leading nowhere. You can’t leave your place because it is home. You can’t buy a horse and ride out of town because then you have to let go of your house and put all your stuff in storage. You won’t have a job or an address. You’ll be free. But are you capable of change? Are you getting old, cowardly? Are you stuck? I heard that someone’s house burned down in the neighbourhood. It took an hour and then everything was gone.

For one month I went around and around. I couldn’t sleep. I’d light the candles at dawn and smoke, looking to the eastern hills. I imagined saddling up the horse and the saddlebags, drinking my last coffee and leaving the coffee cup on the stairs, and getting up on the horse. The squeaking of the leather saddle, the sound of horse hooves on the road, one and one and one and one, and the road before us. Why not? The act of settling in has scared off my spirit.

The painting is titled, “Justice”. It’s from an exhibit I had three years ago called, “Coup d’Etat”,  A Stroke of State. The paintings became tarot cards and the spread of my life at the time. I was at a crossroads: al-qaeda was in Mali and marked the end of my travels there, a highway was being built at home, encroaching on my sleepy village. Change was coming, whether I was ready for it or not.

A cormorant balances on a rock over the water with its wings out-stretched to encompass the lake. The Justice card represents the need for change, and the moral decisions that come with this. Every change you make is the death of your old self. You can not go back.

After that exhibit, I stopped painting. I continued to write and became a hermit. I thought: am I just going to sit here and go deeper and deeper into my world? Or am I going to move on? If I move on, where will I go?

After I got hit by my painting, I had a cut across my nose that took a week to heal. Everyone saw it and asked what had happened, so I told them, and in telling them I realized that my problem had been solved. I let go of my imaginary horse and went opposite. I decided to stay a little longer. When in doubt, buy time. Once I did this everything fell into place. Without even trying, an opportunity to lease a horse fell into my lap. Jobs appeared. Money started coming in, and unusual ideas, revelations, inventions, opportunities. I had entered the flow. 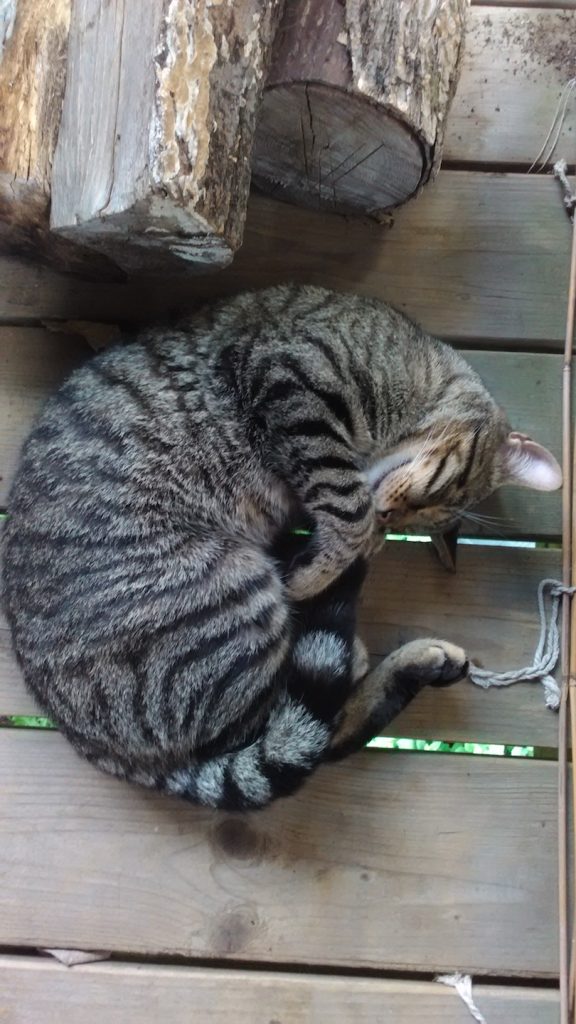 The cat that got the wheels turning… Thanks