He was given to me. I had been taking care of him for neighbours and when they moved away they left him to me. He had some issues. He would break out into a sweat before I rode him. I thought maybe too much had been asked of him, so I worked at calming him, allowing him to trust me, taking him on leisurely walks. Once, we were far away in a meadow and I let him graze. By this point, he had become so docile that I could get off him, drop the rope, and watch him graze while I wandered around, or sat on a rock in the sun. He soon decided it was time to go home, so he picked up his feet and trotted back the way we had come. I lost my ride. I found him later, standing at the stable gate.

The herd was made up of five horses, all Quarter Horses. There was the roan stallion King, a red roan mare, Sal, a white mare called Star, a red chestnut mare with stripe called Chika, and Brandy.

My back yard was a Provincial Park of Precambrian rock millions of years old, pine and rock and mixed boreal forest.  It was on a ancient fault line, an escarpment that separated the hills from the valley. There had once been mountains as high as the Himalayas, and a tropical sea. The land was rich with life, filled with history and spirits, old logging roads, mines, and deer paths. My friends and I could ride forever, if we didn’t get caught by the Park officials. We never understood why horses weren’t allowed. It was the best way to travel, the least intrusive. It was soundless and slow, peaceful. The deer recognized the horses and did not run off.

We went everywhere on our horses, picking apples from lost orchards, playing tag, hide-and-seek, stealing the football from the boys, riding to the general store for candy, rolling cigarettes with one hand, cantering down the pine needle paths, sharing our adolescent angst to the rhythm of horse hooves. It was better than a car.

In the summer, we kept the horses on a friend’s farm in the valley. We had to bike there, and then we had to go find the horses. Either they were hiding in the cedars from the flies, or they were all the way at the farthest reach of the farm. They didn’t want to be caught, so we brought oat buckets to trick them. Then we swung onto their backs and rode them back to the barn. One time the cows got out, and no one was home. Neither I nor my friend knew how to cut cattle, but our Quarter Horses did. They could gallop from a standstill, turn on a dime. We got every cow in and latched the gate, breathless and laughing.

In the autumn we rode our horses back through the hills to their winter stable. We rode in rain and  snow, in sun and wind, on good days and bad, year after year. The horses were our mentors. And after they were gone, they became our spirits. 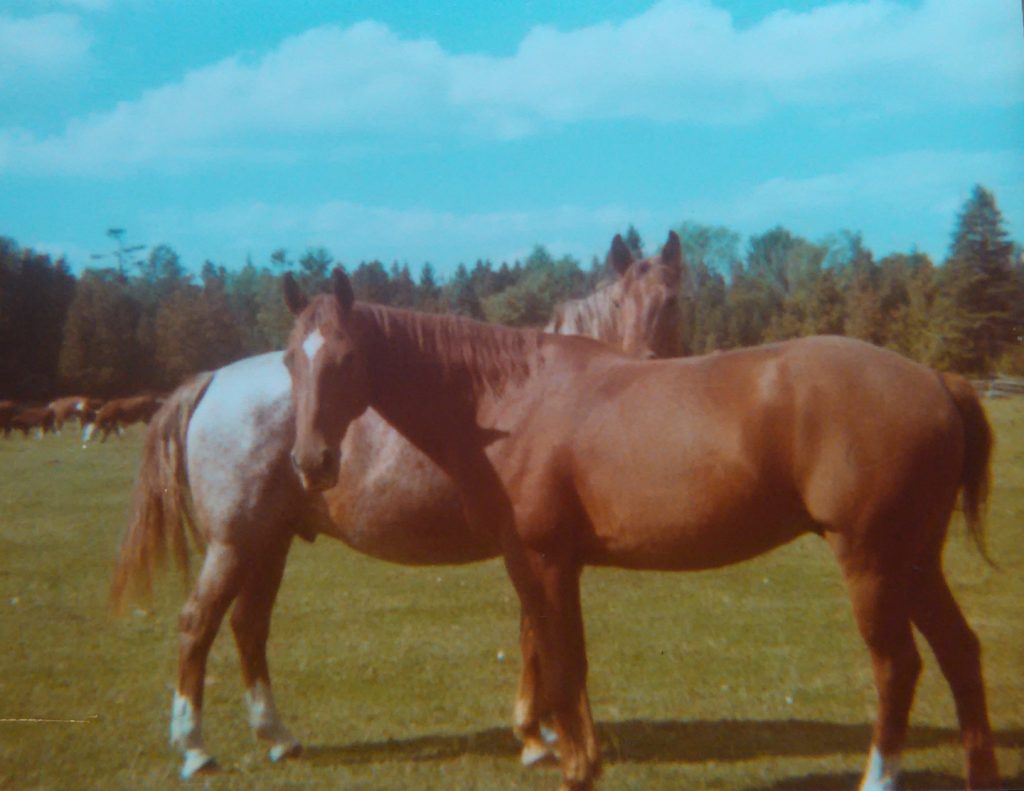 Brandy and King, with the cows in the background